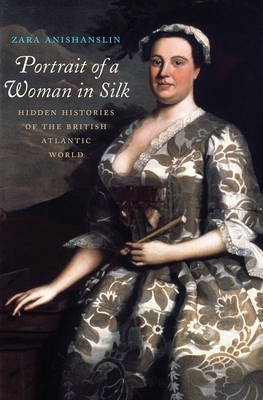 Portrait of a Woman in Silk

Through the story of a portrait of a woman in a silk dress, historian Zara Anishanslin embarks on a fascinating journey, exploring and refining debates about the cultural history of the eighteenth-century British Atlantic world. While most scholarship on commodities focuses either on labor and production or on consumption and use, Anishanslin unifies both, examining the worlds of four identifiable people who produced, wore, and represented this object: a London weaver, one of early modern Britain’s few women silk designers, a Philadelphia merchant’s wife, and a New England painter.

Blending macro and micro history with nuanced gender analysis, Anishanslin shows how making, buying, and using goods in the British Atlantic created an object-based community that tied its inhabitants together, while also allowing for different views of the Empire. Investigating a range of subjects including self-fashioning, identity, natural history, politics, and trade, Anishanslin makes major contributions both to the study of material culture and to our ongoing conversation about how to write history.


Praise For Portrait of a Woman in Silk: Hidden Histories of the British Atlantic World…

"A stimulating text that sheds light on the interconnectedness of the British Atlantic World."—Choice

"This book richly demonstrates the way a focus on material culture can open up a global history of peoples, technologies, and places. . . . [It] illustrates, in its exemplary methodology, the new interdisciplinary knowledge that global material studies make possible in the hands of an inventive and skillful writer."—Ann Rosalind Jones, Early Modern Women: An Interdisciplinary Journal

"This dazzling book discovers within one small canvas a brilliant array of lives, trades, circuits, and empires. Written with verve and insight, Anishanslin’s Portrait of a Woman in Silk paints a global early America in vivid color. It will astonish."—Jane Kamensky, author of A Revolution in Color: The World of John Singleton Copley

"Anishanslin’s capacity to let objects speak about things beyond status and refinement is remarkable. This is hard to do, and she does it brilliantly, and beautifully."—Lauren Winner, Duke University

"Portrait of a Woman in Silk: Behind this deceptively modest (but alluring) title lies a book of stunning insight and creative achievement. No other work I can think of brings together such a range of viewpoints: the mental with the material, the personal with the global, a raft of technical details with extraordinary conceptual depth. From a single painting Anishanslin opens a vast panorama, reaching to the farthest corners of the eighteenth-century world."—John Demos, author of The Unredeemed Captive: A Family Story from Early America

"Extremely intriguing. No one has written such a book, nor made such an argument."—David Hancock, The University of Michigan

Zara Anishanslin is assistant professor of history and art history at the University of Delaware.
Loading...
or
Not Currently Available for Direct Purchase