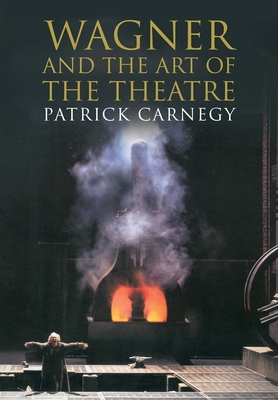 Wagner and the Art of the Theatre

The production of Wagner’s operas is fiercely debated. In this groundbreaking stage history Patrick Carnegy vividly evokes the—often scandalous—great productions that have left their mark not only on our understanding of Wagner but on modern theatre as a whole. He examines the way in which Wagner himself staged his works, showing that the composer remained dissatisfied with even the best of his productions.
After Wagner’s death the scenic challenge was taken up by the Swiss visionary Adolphe Appia, by Gustav Mahler and Alfred Roller in Vienna, and by Otto Klemperer and Ewald Dülberg in Berlin. In Russia the Bolsheviks reinvented Wagner as a social revolutionary, while cinema left its indelible imprint on the Wagnerian stage with Eisenstein’s Die Walküre in Moscow in 1940.
Hitler famously appropriated Wagner for his own ends. Patrick Carnegy unscrambles the interaction of politics and stage production, describing how post-war German directors sought a way to bury the uncomfortable past. The book concludes with a critique of the iconoclastic interpretations by Patrice Chéreau, Ruth Berghaus, and Hans-Jürgen Syberberg.


Praise For Wagner and the Art of the Theatre…

“[A] massive undertaking… This book is truly epic in its scope, and it will certainly become one of the standard reference works in English, not only in Wagner but on twentieth-century stagecraft.” - Patrick O’Connor, Literary Review
— Patrick O'Connor

"...long meditated as well as meticulously researched...its overview is magisterial, and, despite its considerable length, the crisply organised structure and unfailing lucidity of the prose make it worth the effort of a thorough and continuous reading."---Rupert Christiansen, The Spectator
— Rupert Christiansen

"...one of the most marvellous books I have read this year...Patrick Carnegy recounts with deep scholarship combined with good humour, Wagner's obsession with special effects."---A.N. Wilson, The Daily Telegraph
— A.N. Wilson

Formerly a music critic for the Times and dramaturg at the Royal Opera House, Covent Garden, Patrick Carnegy has lectured, broadcast, and published widely on Wagner, opera, and the theatre.
Loading...
or
Not Currently Available for Direct Purchase