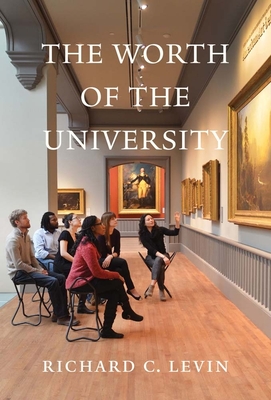 The Worth of the University

Published on the occasion of Richard C. Levin’s retirement as president of Yale University, this captivating collection of speeches and essays from the past decade reflects both his varied intellectual passions and his deep commitment to university life and leadership. Whether discussing the economic implications of climate change or speaking to an incoming class of Yale freshmen, he argues for the vital importance of scholarship and the critical role that universities play in educating students and promoting the overall well-being of our society.

This collection is a sequel to The Work of the University, which contained the principal writings from Levin’s first decade as Yale’s president, and it enunciates many of the same enduring themes: forging a strong partnership with the city of New Haven, rebuilding Yale’s physical infrastructure, strengthening science and engineering, and internationalizing the university. But this companion volume also captures the essence of university leadership. In addressing topics as varied as his personal sources of inspiration, the development of Asian universities, and the university’s role in promoting innovation and economic growth, Levin challenges the reader to be more engaged, more creative, more innovative, and above all, a better global citizen. Throughout, his commitment to and affection for Yale shines through.

Richard C. Levin, the Frederick William Beinecke Professor of Economics, is the twenty-second president of Yale University. Before becoming president in 1993, he taught economics at Yale for two decades, chaired the economics department, and served as dean of the Graduate School. Levin serves on President Obama’s Council of Advisors for Science and Technology. He is a director of the Hewlett Foundation, ClimateWorks, and American Express. He served on a bipartisan commission to recommend improvements in the nation’s intelligence capabilities, and he co-chaired a major review of the nation’s patent system for the National Academy of Sciences. He holds honorary degrees from Harvard, Princeton, Oxford, Peking, Tokyo, and Waseda universities, as well as the Chinese University of Hong Kong. He is a Fellow of the American Academy of Arts and Sciences.
Loading...
or
Not Currently Available for Direct Purchase