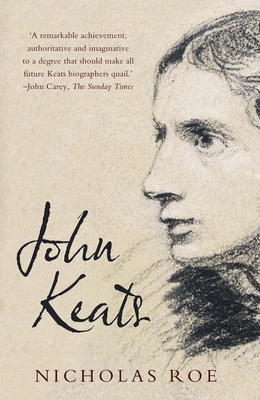 An entirely new portrait of Keats, rich with insights into the torments of his life and the imaginative sources of his works

This landmark biography of celebrated Romantic poet John Keats explodes entrenched conceptions of him as a delicate, overly sensitive, tragic figure. Instead, Nicholas Roe reveals the real flesh-and-blood poet: a passionate man driven by ambition but prey to doubt, suspicion, and jealousy; sure of his vocation while bitterly resentful of the obstacles that blighted his career; devoured by sexual desire and frustration; and in thrall to alcohol and opium. Through unparalleled original research, Roe arrives at a fascinating reassessment of Keats's entire life, from his early years at Keats's Livery Stables through his harrowing battle with tuberculosis and death at age 25. Zeroing in on crucial turning points, Roe finds in the locations of Keats's poems new keys to the nature of his imaginative quest.

Roe is the first biographer to provide a full and fresh account of Keats's childhood in the City of London and how it shaped the would-be poet. The mysterious early death of Keats's father, his mother's too-swift remarriage, living in the shadow of the notorious madhouse Bedlam—all these affected Keats far more than has been previously understood. The author also sheds light on Keats's doomed passion for Fanny Brawne, his circle of brilliant friends, hitherto unknown City relatives, and much more. Filled with revelations and daring to ask new questions, this book now stands as the definitive volume on one of the most beloved poets of the English language.

Nicholas Roe is professor of English, University of St. Andrews. He is the author of numerous biographical and critical works on writers of the Romantic period. He lives in Scotland.
Loading...
or support indie stores by buying on
(This book is on backorder)