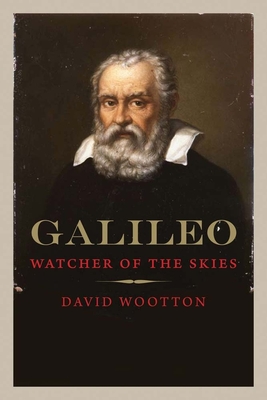 Watcher of the Skies

A provocative and penetrating new life of Galileo, placing the man, his achievements, and his failures in the broader history of the Scientific Revolution

Galileo (1564–1642) is one of the most important and controversial figures in the history of science. A hero of modern science and key to its birth, he was also a deeply divided man: a scholar committed to the establishment of scientific truth yet forced to concede the importance of faith, and a brilliant analyst of the elegantly mathematical workings of nature yet bungling and insensitive with his own family.

Tackling Galileo as astronomer, engineer, and author, David Wootton places him at the center of Renaissance culture. He traces Galileo through his early rebellious years; the beginnings of his scientific career constructing a “new physics”; his move to Florence seeking money, status, and greater freedom to attack intellectual orthodoxies; his trial for heresy and narrow escape from torture; and his house arrest and physical (though not intellectual) decline. Wootton reveals much that is new—from Galileo’s premature Copernicanism to a previously unrecognized illegitimate daughter—and, controversially, rejects the long-established orthodoxy which holds that Galileo was a good Catholic.

Absolutely central to Galileo’s significance—and to science more broadly—is the telescope, the potential of which Galileo was the first to grasp. Wootton makes clear that it totally revolutionized and galvanized scientific endeavor to discover new and previously unimagined facts. Drawing extensively on Galileo’s voluminous letters, many of which were self-censored and sly, this is an original, arresting, and highly readable biography of a difficult, remarkable Renaissance genius.


Praise For Galileo: Watcher of the Skies…

"In a quiverful of publications, David Wootton has made it his mission to help us view the Renaissance thought-world in new ways, and this elegant biography does not disappoint. The Galileo he portrays is no saint, either Catholic or secular, but is the more fascinating for revealing the great scientist's selfishness, anxiety and political ineptitude, together with all the intellectual blind alleys taken in struggles towards his eventual goal. Wootton vividly contrasts the religious and political claustrophobia of seventeenth-century Italy with the abstract beauty of the mathematics and geometry which so delighted his subject. This is an absorbing study worthy of the life-story it tells.”—Diarmaid MacCulloch
— Diarmaid MacCulloch

"Wootton’s Galileo is many things: private unbeliever, reluctant empiricist and impetuous thinker. This brilliant book traces Galileo’s difficult negotiations of academic jealousies, court politics and ecclesiastical scrutiny, allows us to imagine the excitement and danger of looking through a telescope in Venice, and gives fresh insights into the mind and the man as father and son. A remarkable achievement."—Justin Champion
— Justin Champion

"Wootton's biography has much to recommend it. It is engagingly written and offers fresh insights into Galileo's intellectual development."—James Hannam, Standpoint Magazine

"Wootton. . . argues persuasively in this well researched, intellectual biography that Galileo was a Copernican long before his discovery of the moons of Jupiter proved that not all heavenly bodies revolved around the Earth."—Manjit Kumar, Sunday Telegraph

"Wittily challenging... Wootton boldly presents his book as an intellectual biography which cannot be isolated from contemporary attitudes to tradition and innovation, and which cannot focus on Galileo's ideas without considering his personality and personal relations."—Claudio Vita-Finzi, Times Literary Supplement
— Claudio Vita-Finzi

"Wootton [is] a deeply erudite historian by trade and a passionate revisionist by temperament...Read Wooton to meet a Galileo who was always estranged froom vital aspects of his social and cultural world--and used that estrangement, as great intellectuals do, to fuel his intellectual progress."—Anthony Grafton, Bookforum
— Anthony Grafton

"A deeply erudite historian by trade and a passionate revisionist by temperament. . . . Read Wootton to meet a Galileo who was always estranged from vital aspects of his social and cultural world-and used that estrangement, as a great intellectuals do, to fuel his intellectual progress."—Anthony Grafton, Bookforum
— Anthony Grafton

"I heartily recommend [this book]…. Wootton aims at an intellectual biography and the results are often magnificent, especially when it comes to explaining the science."—Jonathon Wright, Catholic Herald
— Jonathon Wright

“Wootton has written a thoughtful biography full of Renaissance detail in which he shows Galileo as a towering figure of genius, a man whose science was conditioned by his character, and who character enabled him to formulate a unique view of the Universe and man’s place in it…..This must be the definitive Galileo biography for the general reader.”—Barry Kent, The Observatory Magazine Vol.131
— Barry Kent

"[This book] demonstrates an awesome command of the vast Galileo literature. . . . Wootton excels in boldly speculating about Galileo's motives and the overall trajectory of his life. . . . [An] engaging account."—Owen Gingerich, The New York Times Book Review
— Owen Gingerich

"Wootton has written a lively book that is interesting to read, and one can concentrate on the fascinating details from the extensive research."—Noel M. Swerdlow, American Scientist
— Noel M. Swerdlow

"[This book] demonstrates an awesome command of the vast Galileo literature. . . . Wootton excels in boldly speculating about Galileo's motives and the overall trajectory of his life. . . . [An] engaging account."—Owen Gingerich, The New York Times Book Review
— John Derbyshire

" . . . a thought-provoking picture of him [Galileo]. . . . To read this account of how his ideas clashed witht he accepted ones is to appreciate that he is one of the world's great secular heroes."—Rob Hardy, The Commercial Dispatch
— Rob Hardy

“Wootton’s writing achieves its goals well and a thorough examination and understanding of the large number of Galileo’s papers that have survived has allowed the author to deliver an absorbing account. . .Containing exhaustive notes and an excellent bibliography, Watcher of the Skies is a highly readable account of the life and career of the controversial, impulsive, often rebellious and ever-ambitious astronomer, author and scientist.”—Brian Jones, BBC Sky at Night Magazine
— Brian Jones

David Wootton is Anniversary Professor of History, University of York.
Loading...
or
Not Currently Available for Direct Purchase