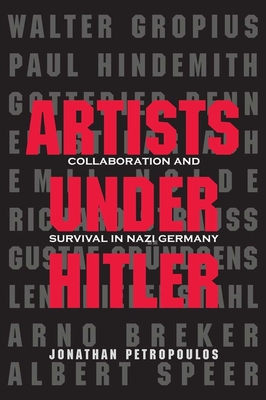 Collaboration and Survival in Nazi Germany

A penetrating inquiry into the motives, moral dilemmas, and compromises of Walter Gropius, Emil Nolde, and other celebrated artists who chose to remain in Nazi Germany

“What are we to make of those cultural figures, many with significant international reputations, who tried to find accommodation with the Nazi regime?” Jonathan Petropoulos asks in this exploration of some of the most acute moral questions of the Third Reich. In his nuanced analysis of prominent German artists, architects, composers, film directors, painters, and writers who rejected exile, choosing instead to stay during Germany’s darkest period, Petropoulos shows how individuals variously dealt with the regime’s public opposition to modern art. His findings explode the myth that all modern artists were anti-Nazi and all Nazis anti-modernist.

Praise For Artists Under Hitler: Collaboration and Survival in Nazi Germany…

“A persuasive, nuanced, and surprising picture of German culture under the Nazis.”—Kirkus Reviews
— Kirkus Reviews

Jonathan Petropoulos is John V. Croul Professor of European History, Claremont McKenna College, and author of several books on culture in the Third Reich. He is former Research Director for Art and Cultural Property, Presidential Commission on Holocaust Assets in the United States. He lives in Claremont, CA.
Loading...
or
Not Currently Available for Direct Purchase