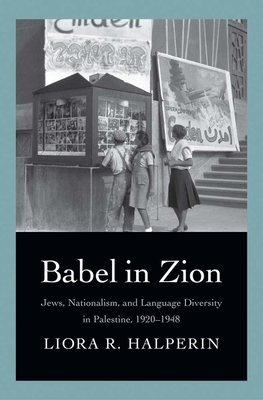 The promotion and vernacularization of Hebrew, traditionally a language of Jewish liturgy and study, was a central accomplishment of the Zionist movement in Palestine. Viewing twentieth-century history through the lens of language, author Liora Halperin questions the accepted scholarly narrative of a Zionist move away from multilingualism during the years following World War I, demonstrating how Jews in Palestine remained connected linguistically by both preference and necessity to a world outside the boundaries of the pro-Hebrew community even as it promoted Hebrew and achieved that language’s dominance.

The story of language encounters in Jewish Palestine is a fascinating tale of shifting power relationships, both locally and globally. Halperin’s absorbing study explores how a young national community was compelled to modify the dictates of Hebrew exclusivity as it negotiated its relationships with its Jewish population, Palestinian Arabs, the British, and others outside the margins of the national project and ultimately came to terms with the limitations of its hegemony in an interconnected world.


Praise For Babel in Zion: Jews, Nationalism, and Language Diversity in Palestine, 1920-1948…

“This intellectual tour de force is one of the most important books on Zionist history to appear in the past decade. It will revolutionize the field in both its subject and methodology.”—Derek Penslar, University of Oxford
— Derek Penslar

“Cutting through Zionist and anti-Zionist myths alike, Liora Halperin reveals a Zionism painfully aware of its own limited power, divided in its attitude to Arab neighbors and British rulers, and surprisingly realistic about the limits of nationalist cultural revolution.”— Kenneth B. Moss, The Johns Hopkins University

"Liora Halperin’s Babel in Zion revisits our conventional image of a purer time in the past when the Zionist collective in Palestine was united in its commitment to Hebrew and its rejection of other tongues. An illuminating book that transforms our understanding of the history of the Zionist cultural project."—Israel Bartal, The Hebrew University of Jerusalem
— Israel Bartal

"Babel in Zion offers us an empirically rich, theoretically sophisticated and highly original perspective on Zionist efforts to make Hebrew the exclusive language of Jews in mandate Palestine, imaginatively exploring the gap between official rhetoric and lived reality as well as the persistence of linguistic diversity down to 1948 and beyond."—Zachary Lockman, New York University

“Babel in Zion offers a sophisticated cultural history of the struggle for hegemony of the Hebrew language in the multi-lingual, multi-ethnic and binational reality of the pre-State Yishuv in Palestine/Eretz-Israel. It is groundbreaking in its rereading of the national revival thesis as heterogeneous and self-contradictory, and in foregrounding how the diasporic tongues undermine this hegemony.”—Hannan Hever, Yale University
— Hannan Hever

Winner of the 2015 Shapiro Award for Best Book in Israel Studies published in 2014. This award is sponsored by the Association for Israel Studies.
— Shapiro Prize

Liora R. Halperin is Assistant Professor of History and Jewish Studies at the University of Colorado Boulder. She lives in Boulder, CO.
Loading...
or
Not Currently Available for Direct Purchase