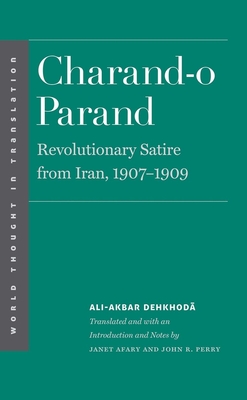 A classic of Modern Persian literature, Charand-o Parand (Stuff and Nonsense) is a work familiar to every literate Iranian. Originally a series of newspaper columns written by scholar and satirist Ali-Akbar Dehkhoda, the pieces poke fun at mullahs, the shah, and the old religious and political order during the Constitutional Revolution in Iran (1906–11). The essays were the Daily Show of their era. The columns were heatedly debated in the Iranian parliament, and the newspaper was shut down on several occasions for its criticism of the religious establishment. Translated by two distinguished scholars of Persian language and history, this volume makes Dehkhoda’s entertaining political observations available to English readers for the first time.

Ali-Akbar Dehkhoda (1879–1956) was a prominent linguist whose greatest achievement was an authoritative Persian dictionary.
Loading...
or support indie stores by buying on