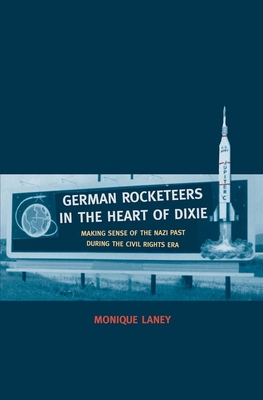 German Rocketeers in the Heart of Dixie

Making Sense of the Nazi Past during the Civil Rights Era

This thought-provoking study by historian Monique Laney focuses on the U.S. government–assisted integration of German rocket specialists and their families into a small southern community soon after World War II. In 1950, Wernher von Braun and his team of rocket experts relocated to Huntsville, Alabama, a town that would celebrate the team, despite their essential role in the recent Nazi war effort, for their contributions to the U.S. Army missile program and later to NASA’s space program. Based on oral histories, provided by members of the African American and Jewish communities, and  by the rocketeers’ families, co-workers, friends, and neighbors, Laney’s book demonstrates how the histories of German Nazism and Jim Crow in the American South intertwine in narratives about the past. This is a critical reassessment of a singular time that links the Cold War, the Space Race, and the Civil Rights era while addressing important issues of transnational science and technology, and asking Americans to consider their country’s own history of racism when reflecting on the Nazi past.

Praise For German Rocketeers in the Heart of Dixie: Making Sense of the Nazi Past during the Civil Rights Era…

“Laney, a daughter of Alabama and Germany, has produced an insightful, nuanced study of a unique historical phenomenon: the moral and cognitive dissonance that ensues when former agents of the Third Reich are transplanted to a segregated southern community and charged with winning the Cold War space race.”—Diane McWhorter, Pulitzer Prize–winning author of Carry Me Home
— Diane McWhorter

“Much has been written about the German-American rocket engineers led by Wernher von Braun. But Monique Laney’s important, original and well-written book opens a new dimension: how they were integrated into Huntsville during the Civil Rights era and what that tells us about how that city processed, or did not process, their Nazi past while grappling with Alabama’s  shifting racial climate. Her work makes especially noteworthy contributions to history of “transnational memory,” but it will also intrigue a wide variety of readers and scholars interested in space history, the history of technology, Southern history, immigration, social history and American Studies.”—Michael J. Neufeld, author of Von Braun
— Michael J. Neufeld

“That the engineers who helped lift the United States into outer space were complicit in the cruelty of the Third Reich is the paradox at the heart of Monique Laney’s fascinating book. Her moral concern drives a superb work of ethnography as well as history.”—Stephen J. Whitfield, Brandeis University
— Stephen J. Whitfield

“This book explains how the Huntsville community wrestled with historical memory, denying, rationalizing, or confirming past atrocities for self-preservation, civic boosterism, or ethnic identity.”—Wayne Flynt, author of Alabama in the Twentieth Century
— Wayne Flynt

“A sparkling migration history, Laney’s rich ensemble of oral histories and thoughtful analysis recreates the complexities of life and labor in the post-war Southern community where rocket experts sought to reconcile identities past and present.”—Alan Kraut, author of Silent Travelers
— Alan Kraut

“What makes this book so important is the access to oral history and personal materials from the Huntsville German community. A tremendously solid piece of scholarship.”—James R. Hansen, Auburn University
— James R. Hansen

“This richly documented study of postwar migration and memory illuminates the history of a town integrated and divided under the long shadows of Nazism and racism.”—Alexander Freund, University of Winnipeg
— Alexander Freund

“In 1950, more than 100 German rocket experts, many with a Nazi past, settled in Huntsville, Alabama. Reinventing themselves and their families in the Jim Crow-era American South, they transformed a backwater town into ‘Rocket City, USA’. Ten years later, these space personae had fully integrated and become highly admired citizens, with Cold War techno-celebrity Wernher von Braun as the town’s national and international figurehead. Based on more than 70 oral history interviews, Monique Laney’s study analyzes the making and dismantling of a community whose memories transcended national borders. Located at the intersection of migration history, memory studies and space history, German Rocketeers in the Heart of Dixie is fascinating, rich and timely.”—Alexander C.T. Geppert, New York University
— Alexander C.T. Geppert

Monique Laney is assistant professor of history at Auburn University. She lives in Auburn, AL.
Loading...
or
Not Currently Available for Direct Purchase