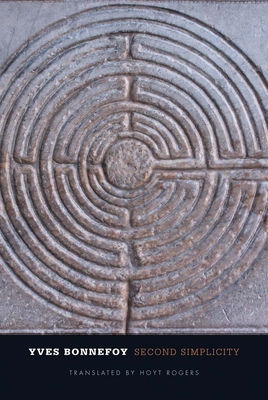 Yves Bonnefoy, who will soon attain the age of ninety, has gratified his readers during the past two decades with the most prolific and innovative period of his splendid lifework. This volume presents in English and French an inviting array of his recent writings, carefully selected for their literary quality as well as their broad appeal. It features several works never published before and many that have never been translated into English. The first anthology of Bonnefoy's work to appear since 1995, this collection reflects the poet's powerful engagement with the New England landscape; its quiet woods and fields have helped to shape to the pared-down aesthetic of his recent years. The book is the first to showcase not only the poetry for which Bonnefoy is justly renowned but also his inventive compositions in prose. Appropriately, the book alternates more traditional verse with freer forms, just as the author has done in several major works of the past twenty years; that symbiotic approach is one of the hallmarks of this latter phase of his art. Superbly translated by Hoyt Rogers, the collection is organized chronologically, revealing clearly how the poet continues to extend and refine his scope and style. Rogers provides a masterly introduction in which he analyzes aspects of Bonnefoy's recent writings and the "second simplicity" that characterizes his late work.

Yves Bonnefoy, a perennial favorite for the Nobel Prize, has received numerous international awards, including the Kafka Prize and the European Prize for Poetry. Hoyt Rogers translates literary works from the French, German, and Spanish.

“Second Simplicity . . . reveal[s] Bonnefoy’s remarkable inventiveness and desire to accommodate whatever form of address is called for, whether in verse or prose.”—Ron Slate, On the Seawall
— Ron Slate

"Yves Bonnefoy is one of the rare poets in the history of literature to have sustained the highest level of artistic excellence throughout an entire lifetime—now more than half a century of work, and still counting. These recent poems, superbly translated by Hoyt Rogers, attest to his enduring greatness."—Paul Auster