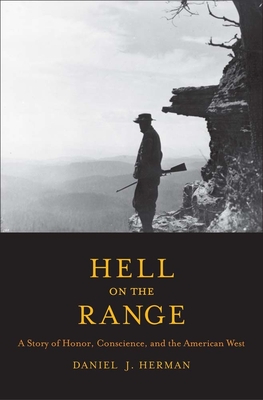 Hell on the Range (Paperback)

A Story of Honor, Conscience, and the American West (The Lamar Series in Western History)

At the heart of Arizona’s range war, argues Herman, was a conflict between cowboys’ code of honor and Mormons’ code of conscience. He investigates the sources of these attitudes, tracks them into the early twentieth century, and offers rich insights into the roots of American violence and peace.

Daniel Justin Herman is professor of history at Central Washington University. He lives in Ellensburg, Washington.

Praise For Hell on the Range: A Story of Honor, Conscience, and the American West (The Lamar Series in Western History)…

"This is a rich, deep, and rewarding work of western history - a genuine contribution to the histories of American violence, society and culture, politics, and economics. Herman's research is nothing less than extraordinary as it taps an especially rich body of personal papers as well as published and unpublished memoirs. It will become a classic in the historiography of the American West."—Durwood Ball, University of New Mexico
— Durwood Ball

“This is a most impressive, well-documented, detailed and essentially interesting study. In Western history studies, it is a real and highly valuable breakthrough.”—Bertram Wyatt-Brown, University of Florida

"An original and provocative contribution to western history. By linking the Rim Country War to the often conflicting demands of honor and conscience, Herman demonstrates how frontier violence continued to shape western identity for generations to come."—Benjamin H. Johnson, author of Revolution in Texas
— Benjamin H. Johnson
or
Not Currently Available for Direct Purchase
Copyright © 2020 American Booksellers Association