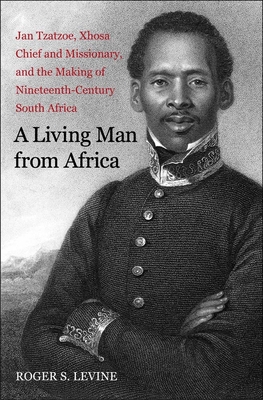 A Living Man from Africa

Born into a Xhosa royal family around 1792 in South Africa, Jan Tzatzoe was destined to live in an era of profound change—one that witnessed the arrival and entrenchment of European colonialism. As a missionary, chief, and cultural intermediary on the eastern Cape frontier and in Cape Town and a traveler in Great Britain, Tzatzoe helped foster the merging of African and European worlds into a new South African reality. Yet, by the 1860s, despite his determined resistance, he was an oppressed subject of harsh British colonial rule. In this innovative, richly researched, and splendidly written biography, Roger S. Levine reclaims Tzatzoe's lost story and analyzes his contributions to, and experiences with, the turbulent colonial world to argue for the crucial role of Africans as agents of cultural and intellectual change.


Praise For A Living Man from Africa: Jan Tzatzoe, Xhosa Chief and Missionary, and the Making of Nineteenth-Century South Africa (New Directions in Narrative History)…

“In this beautifully written story of Jan Tzatzoe, an African chief and British-educated Christian who embodied many of the contradictions of his age, Roger Levine paints a vivid portrait of African-European relations on the South African frontier during its historical transformation in the nineteenth century.  Levine shows that on the South African frontier borders were porous, identities were malleable, and religious beliefs were negotiable.  Africans were neither total resistors nor total collaborators, but instead negotiated tortuous paths through shifting landscapes.”—Robert Harms, author of The Diligent: A Voyage through the Worlds of the Slave Trade
— Robert Harms

“This fascinating and absorbing work demonstrates a great depth of knowledge of colonial and British source materials. Despite the difficulties of disaggregating the sounds of Jan Tzatzoe from those of his colonial translators and mediators, Levine gives us access to the voice of an African who experienced fluctuating fortunes as a cultural intermediary, a man-between, thus making a particularly significant contribution to our understanding of the dialogue between Western and indigenous knowledge systems.”—Andrew Bank, University of the Western Cape
— Andrew Bank

“This is a fascinating and frequently moving book, packed with unexpected detail and beautifully crafted. A rich micro history of the life of an African chief, diplomat and Christian evangelist who was ultimately betrayed by the colonial state, A Living Man from Africa also raises penetrating wider questions about the lived experience of colonialism.”—Elizabeth Elbourne, McGill University
— Elizabeth Elbourne

Roger S. Levine is associate professor of history at Sewanee: The University of the South.
Loading...
or
Not Currently Available for Direct Purchase