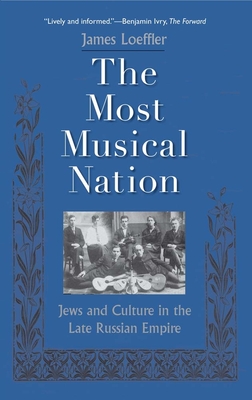 The Most Musical Nation

Jews and Culture in the Late Russian Empire

Drawing on a mass of unpublished writings and archival sources from prerevolutionary Russian conservatories, this book offers an insightful account of the Jewish search for a modern identity in Russia through music, rather than politics or religion.

Praise For The Most Musical Nation: Jews and Culture in the Late Russian Empire…

“With this solid, savvy, and satisfying book, Loeffler advances Jewish studies, music history, and Russian studies by shedding new light on the stage of a twentieth-century social and musical drama.”—Mark Slobin, author of Fiddler on the Move: Exploring the Klezmer World
— Mark Slobin

“The Jews’ remarkable place in the modern history of music – classical, popular and folk – is well known, but rarely subjected to serious analysis. Loeffler’s sophisticated and deeply researched book casts new light both on the Jewish contribution to music in general and to the emergence of specifically ‘Jewish music’ in the Russian Empire, home to the largest and most vital Jewish community in the world."—Ezra Mendelsohn, The Hebrew University

“James Loeffler’s new book is both fascinating and pathbreaking. This important and original contribution to scholarship must be read by students of music, Russian culture, and Jewish history.”—Leon Botstein, President of Bard College, and Music Director and Conductor of the American Symphony Orchestra and the Jerusalem Symphony Orchestra

James Loeffler is associate professor of history at the University of Virginia.
Loading...
or support indie stores by buying on