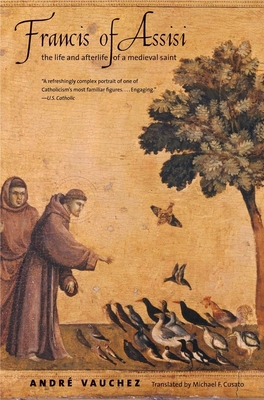 The Life and Afterlife of a Medieval Saint

First published in France, where it was awarded the Prix Chateaubriand, this masterful new biography of Francis is now available in English

In this towering work, André Vauchez draws on the vast body of scholarship on Francis of Assisi produced over the past forty years as well on as his own expertise in medieval hagiography to tell the most comprehensive and authoritative version of Francis’s life and afterlife published in the past half century.

After a detailed and yet engaging reconstruction of Francis's life and work, Vauchez focuses on the myriad texts—hagiographies, chronicles, sermons, personal testimonies, etc.—of writers who recorded aspects of Francis's life and movement as they remembered them, and used those remembrances to construct a portrait of Francis relevant to their concerns. We see varying versions of his life reflected in the work of Machiavelli, Luther, Voltaire, German and English romantics, pre-Raphaelites, Italian nationalists, and Mussolini, and discover how peace activists, ecologists, or interreligious dialogists have used his example to promote their various causes. Particularly noteworthy is the attention Vauchez pays to Francis’s own writings, which strangely enough have been largely overlooked by later interpreters.

The product of a lifetime of study, this book reveals a historian at the height of his powers.

Praise For Francis of Assisi: The Life and Afterlife of a Medieval Saint…

“For thirty years, we have been waiting for a new scholarly biography of Francis of Assisi. André Vauchez offers us that and so much more. Not only does he give us a thorough assessment of Francis in his historical context; he also offers us an intimate understanding of his spiritual experience.”—Jacques Dalarun, Institut de Recherches et d'Histoire des Textes, Paris

“The leading historian of later-medieval sainthood has here incorporated much recent Italian research in this mature appreciation of the life, cult, and varied interpretations of the era’s most engaging saintly protagonist.”—Lester K. Little, Smith College

“An indispensable document attesting to what can be known of the Poor Man of Assisi, as well as a stirring exemplum of written history.”—Michael Signorelli, Paris Review Daily
— Michael Signorelli

“The single best book about Francis now available in English . . . Vauchez must be given the crown.”—Lawrence S. Cunningham, Commonweal
— Lawrence C. Cunningham