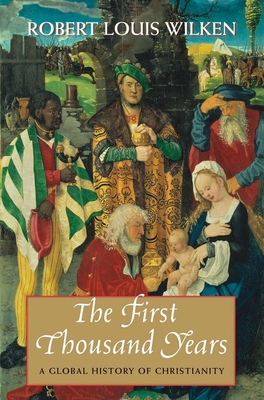 A Global History of Christianity

How did a community that was largely invisible in the first two centuries of its existence go on to remake the civilizations it inhabited, culturally, politically, and intellectually? Beginning with the life of Jesus, Robert Louis Wilken narrates the dramatic spread and development of Christianity over the first thousand years of its history. Moving through the formation of early institutions, practices, and beliefs to the transformations of the Roman world after the conversion of Constantine, he sheds new light on the subsequent stories of Christianity in the Latin West, the Byzantine and Slavic East, the Middle East, and Central Asia.

Through a selected narration of particularly noteworthy persons and events, Wilken demonstrates how the coming of Christianity set in motion one of the most profound revolutions the world has known. This is not a story limited to the West; rather, Christian communities in Ethiopia, Nubia, Armenia, Georgia, Persia, Central Asia, India, and China shaped the course of Christian history. The rise and spread of Islam had a lasting impact on the future of Christianity, and several chapters are devoted to the early experiences of Christians under Muslim rule. Wilken reminds us that the career of Christianity is characterized by decline and attrition as well as by growth and expansion.

Ten years in the making and the result of a lifetime of study, this is Robert Louis Wilken’s summa, a moving, reflective, and commanding account from a scholar at the height of his powers.

Robert Louis Wilken is William R. Kenan Professor of the History of Christianity Emeritus, University of Virginia. He lives in Washington, D.C.

Praise For The First Thousand Years: A Global History of Christianity…

Praise for The Spirit of Early Christian Thought:
"Magnificently learned [and] deeply felt. . . . An attentive reader of Wilken, whether believer or nonbeliever, will be touched anew by his survey of Christian intellectual life."—Michael Dirda, Washington Post Book World
"Brilliant . . . a riveting story."—Publishers Weekly
"Compelling. . . . An outstanding achievement."—Maria E. Doerfler, Commonweal
"Ambitious and wide-ranging . . . [This] highly accessible volume abounds with lively tales and fascinating connections, and the color illustrations are a delight. Wilken’s recent scholarship has also given him a global perspective of impressive sweep."—Philip Jenkins, Christian Century
"Elegantly written [and] highly readable."—First Things
"Compelling. . . . An outstanding achievement."—Maria E. Doerfler, Commonweal
"Readable and reliable."—Anthony M. Stevens-Arroyo, Catholic Books Review
"[A] masterly and generous-spirited account . . . [that] brings new freshness and clarity."—Eamon Duffy, New York Review of Books
"[W]ilken's book would make a nice addition to the library of a pastor or seminary student seeking an up-to-date overview of the first millennium of Christian history. His writing style makes it easy and interesting to read. . . . His emphasis on the spread of Christianity beyond the Roman empire shows that the gospel has had a global reach from the very beginning of the church's history."—Joel Otto, Wisconsin Lutheran Quarterly
"[An] extraordinary achievement. . . . [The First Thousand Years] is a perfect introductory text: it has a clear storyline that incorporates more people and places than any comparable book on the market."—Daryl R. Ireland, Fides et Historia
"Robert Wilken has written the best kind of authoritative historical survey. Its treatment is learned, thorough, but also accessible for all aspects of early Christian history, and especially for the great significance of Islam to the entire Christian world from the seventh century forward."—Mark Noll, author of The Rise of Evangelicalism: The Age of Edwards, Whitefield, and the Wesleys
"A marvelous and unique survey, learned and authoritative, yet also a perfect introduction to the early history of Christianity. Robert Wilken redraws many boundaries, expanding horizons, summarizing and analyzing with consummate skill. This beautifully written book sets new standards on multiple levels, and should stand for a long time as the benchmark by which all other surveys are measured."—Carlos Eire, author of Waiting for Snow in Havana: Confessions of a Cuban Boy
"This is a rich and wonderful book, not only because of Robert Wilken's narrative gifts, but because of his immense scholarly range and sympathies. His is one of the few treatments of Christianity's first millennium for Anglophone readers that embraces the faith's whole history, cultural and geographical, Eastern and Western, Chalcedonian and Non-Chalcedonian, European, Asian, and African. It is a pure joy to read."—David Hart, author of Atheist Delusions: The Christian Revolution and Its Fashionable Enemies

"Christianity is a historical religion, yet much of its actual life from the New Testament until early modern times remains largely unknown. Robert Wilken, one of our best historians, provides here a fascinating account of Christianity’s first millennium, the undivided church which is the patrimony of all Christians. Written with elegance, grace, and insight."—Timothy George, Dean of Beeson Divinity School