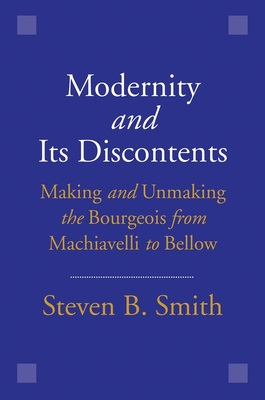 Modernity and Its Discontents (Hardcover)

Making and Unmaking the Bourgeois from Machiavelli to Bellow

By Steven B. Smith

Steven B. Smith examines the concept of modernity, not as the end product of historical developments but as a state of mind. He explores modernism as a source of both pride and anxiety, suggesting that its most distinctive characteristics are the self-criticisms and doubts that accompany social and political progress. Providing profiles of the modern project’s most powerful defenders and critics—from Machiavelli and Spinoza to Saul Bellow and Isaiah Berlin—this provocative work of philosophy and political science offers a novel perspective on what it means to be modern and why discontent and sometimes radical rejection are its inevitable by-products.

Steven B. Smith is Alfred Cowles Professor of Political Science and Philosophy at Yale University.

Praise For Modernity and Its Discontents: Making and Unmaking the Bourgeois from Machiavelli to Bellow…

"[Smith is] superb at bringing abstract ideas to life. . . . Smith’s heart is with an urbane liberal like [Isaiah] Berlin, for whom . . . 'modernity is not a problem to be overcome but a challenge to be met.'"—James Miller, New York Times Book Review
"Modernity and Its Discontents represents the fruit of decades of deep reflection on the achievements and vulnerabilities of modern thought, and of the world that is has generated and reflected. The book is immensely rich."—Joshua L. Cherniss, Review of Politics
"Wonderfully erudite. . . . Nothing less than a short history and analysis of modernity itself."—Christopher Atamian, The Weekly Standard
"Each chapter . . . is a master class on the relationship between academic scholarship and text-centered teaching, linked by a shared concern with the blessings and curses of the modern self in its quest for intellectual coherence and moral significance."—Choice
"A superb collection."—Commonweal
"Steven B. Smith’s well-argued new book analyzes the political and social theories of long-deceased thinkers whose 'modernity' or 'discontent' with modern ideas bequeathed a question[s] that still loom across democratic political cultures."—Lloyd Kramer, Journal of Modern History

Won an Honorable Mention in the Philosophy category for the 2017 American Publishers Awards for Professional & Scholarly Excellence (PROSE)
"Steven B. Smith's timely and thoughtful new book offers an insightful and impressively wide-ranging discussion of modernity and its internal tensions. It will be widely read and discussed for years to come."—Charles L. Griswold, Bowne Professor of Philosophy, Boston University
"Steven B. Smith’s powerfully lucid intellectual history of modernity offers a new take on the dialogue between ancients and moderns, showing how a diverse group of modern philosophers and writers became more aware of their own ideas and identity by engaging with perennial issues. As an account of who we in the West have become, Modernity and its Discontents should inform discussions of what we might mean by progress in the future."—Michael S. Roth, President, Wesleyan University
"Whether you are a lover of modernity or a pre-modern or post-modern critic, this is a book that will engage, enlighten, and provoke you. The chapters are free-standing essays, but they add up to an important argument—and they are at the same time intellectual fun, of a very high order."—Michael Walzer, Institute for Advanced Study, Princeton, NJ
"This is the history of ideas as it should be done—which is to say, a rich and probing and significant book. Steven B. Smith has fully mastered the modern intellectual tradition, and he has a gift for clarity that does not come at the expense of complexity. He refreshes many valuable things. It must be a joy to be his student."—Leon Wieseltier