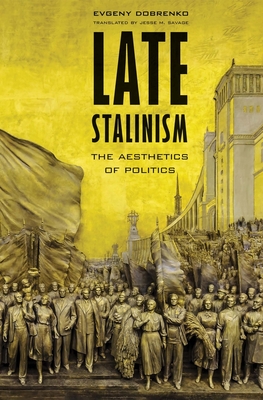 The Aesthetics of Politics

In this nuanced historical analysis of late Stalinism organized chronologically around the main events of the period—beginning with Victory in May 1945 and concluding with the death of Stalin in March 1953—Evgeny Dobrenko analyzes key cultural texts to trace the emergence of an imperial Soviet consciousness that, he argues, still defines the political and cultural profile of modern Russia.


Praise For Late Stalinism: The Aesthetics of Politics…

Shortlisted for the 2021 Pushkin House Prize

“Late Stalinism is both unsettling and hard to ignore. Dobrenko argues that Stalin’s all-encompassing ethnic Russianness rooted deeply in everything from literature and philosophy to film, linguistics, and even biology; that it redefined national identity in the Soviet era and has now germinated anew in Putin’s Russia. This book promises to stimulate debate about the country’s past, present, and future.”—Jeffrey Brooks, Johns Hopkins University, author of The Firebird and the Fox: Russian Culture under Tsars and Bolsheviks

"Dobrenko has produced a magisterial study of Soviet culture in the 1940s, to him the most truly Stalinist period.  This is a much more sophisticated and original interpretation of the decade than we have seen to date, and it will be essential reading for all those interested in Soviet history and culture."—Katerina Clark, Yale University

Evgeny Dobrenko is professor of Russian studies at the University of Sheffield.
Loading...
or
Not Currently Available for Direct Purchase