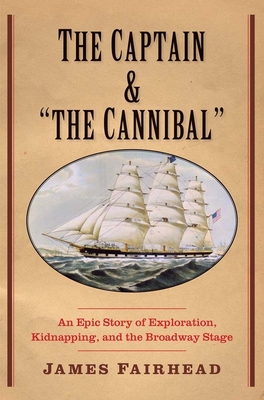 The Captain and "the Cannibal"

An Epic Story of Exploration, Kidnapping, and the Broadway Stage (New Directions in Narrative History)

The astounding saga of an American sea captain and the New Guinean nobleman who became his stunned captive, then ally, and eventual friend

Sailing in uncharted waters of the Pacific in 1830, Captain Benjamin Morrell of Connecticut became the first outsider to encounter the inhabitants of a small island off New Guinea. The contact quickly turned violent, fatal cannons were fired, and Morrell abducted young Dako, a hostage so shocked by the white complexions of his kidnappers that he believed he had been captured by the dead. This gripping book unveils for the first time the strange odyssey the two men shared in ensuing years. The account is uniquely told, as much from the captive’s perspective as from the American’s.

Upon returning to New York, Morrell exhibited Dako as a “cannibal” in wildly popular shows performed on Broadway and along the east coast. The proceeds helped fund a return voyage to the South Pacific—the captain hoping to establish trade with Dako’s assistance, and Dako seizing his chance to return home with the only person who knew where his island was. Supported by rich, newly found archives, this wide-ranging volume traces the voyage to its extraordinary ends and en route decrypts Morrell’s ambiguous character, the mythic qualities of Dako’s life, and the two men’s infusion into American literature—as Melville’s Queequeg, for example, and in Poe’s Pym. The encounters confound indigenous peoples and Americans alike as both puzzle over what it is to be truly human and alive.

Praise For The Captain and "the Cannibal": An Epic Story of Exploration, Kidnapping, and the Broadway Stage (New Directions in Narrative History)…

“Here is a grand global seafaring epic, narrated by James Fairhead with vivid drama and literary flair.”—Marcus Rediker, author of The Amistad Rebellion: An Atlantic Odyssey of Slavery and Freedom
— Marcus Rediker

“An extraordinary work! Combining the analytical skills of a social anthropologist with the investigative techniques of a narrative historian, Fairhead reconstructs the travels of a young Pacific Islander and his American captor and benefactor across seven seas and six continents. Telling the story from the point of view of both the islander and the captain, Fairhead investigates the cultural fictions, economic interests, and global networks that animated the nineteenth-century world.”—Robert Harms, author of The Diligent: A Voyage through the Worlds of the Slave Trade
— Robert Harms

“By reconstructing the fascinating story of how Dako, a prince from the island of Uneapa, near New Guinea, came to appear on the New York stage in the early 1830s, James Fairhead brilliantly illuminates the cultural and often tragic encounters of profit-seeking Yankees with worlds other than the Atlantic and Native American. Deeply researched and elegantly written, this is historical anthropology and narrative history at their most enlightening and compelling.”—David Richardson, co-author of Atlas of the Transatlantic Slave Trade
— David Richardson

“[A] superb new cultural history masquerading as an adventure tale . . . A fascinating glimpse into the sometimes ruthless Realeconomik of the early 19th century, which Fairhead delivers with great storytelling flair.”—Washington Post
— Washington Post

"Fairhead . . . has created what is both a gripping drama and a perceptive analysis of the experiences of both colonials and colonizers . . . This book, once opened, will keep you up late until the last page has been turned."—Natural History
— Natural History

‘The joy of Fairhead’s excellent book lies in its wonderful detail… Teasing truth out of fiction Fairhead provides us with a tale as remarkable for what it says about ‘’us’’ as it does about ‘’them’’.’—Philip Hoare, Literary Review.
— Philip Hoare

"The real adventurer of our time may be someone like Fairhead, a visionary detective who has dug into records that were crumbling, dusty, and lost from view, and used them to recreate a story that is as amazing now as it must have been to the people who lived it."—Santa Fe New Mexican
— Santa Fe New Mexican

James Fairhead is professor of social anthropology at the University of Sussex. He is the author of four previous books, including the prize-winning Misreading the African Landscape: Society and Ecology in a Forest-Savanna Mosaic. He lives in East Sussex, UK.
Loading...
or
Not Currently Available for Direct Purchase