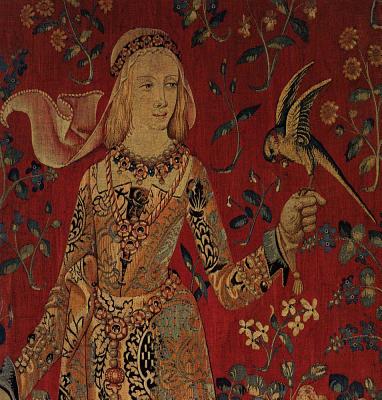 Masterpieces of Tapestry from the Fourteenth to the Sixteenth Century (Paperback)

The present exhibition is one of a series of five worked out in the partnership between the Metropolitan Museum and the Réunion des Musées Nationaux of France. The others are: Nineteenth-Century French Drawings from The Metropolitan Museum of Art; Italian Renaissance Drawings from the Louvre, shown at the Metropolitan in October 1974; Impressionism, which included some forty-five of the greatest paintings in the style and was seen at the Louvre in September and here in December 1974; and finally, French Painting from David to Delacroix, which opened in Paris in the winter of 1974, followed by showings at the Detroit Institute of Art in the spring of 1975 and the Metropolitan in the summer.

Following its appearance at the Grand Palais in Paris, Masterpieces of Tapestry was presented in New York in association with and under the patronage of the National Endowment for the Humanities, and the National Endowment for the Arts, and under the sponsorship of Mr. and Mrs. Ben Heller of New York City. Without the extraordinary aid of the two Endowments and the enlightened generosity of these two art-loving private patrons the exhibition simply would not have been possible here.

As one contemplates such treasures as the enormous tapestry from the Apocalypse series at Angers, the incomparable six pieces of the Lady with the Unicorn from the Cluny Museum (shown for the first—and probably last—time with The Cloisters' Hunt of the Unicorn set), the four wonderful pieces lent us by the Hermitage in Leningrad, the pieces from the Cluny Museum of the David and Bathsheba set, and the famed Winged Stags from the Cathedral of Rouen, it may be worthwhile to note what tapestries themselves are in the broad perspective of history. As early as art is recorded we are aware of man's urge to transform interior walls from simple, mute surfaces into panoramas of triumph, acts of faith, or modes of decorative splendor. From the walls of Lascaux and Altamira to Thera, to the painted stoas of the Acropolis, to the Clubhouse of the Cnidians at Delphi, where Polygnotos' scenes of the underworld could once be seen, to the palace of the Macedonian kings at Pella, to Pompeii and Herculaneum and Boscoreale, to Bury St. Edmunds and palaces and castles of the Middle Ages—and indeed even to our own day—man has destroyed the bleak immutability of walls with special artifices, tapestries being not the least of these in more recent times. Because of the tapestry's imperviousness to cold and damp, it was in a sense northern Europe's answer to the fresco of southern lands. [This book was originally published in 1974 and has gone out of print. This edition is a print-on-demand version of the original book.]