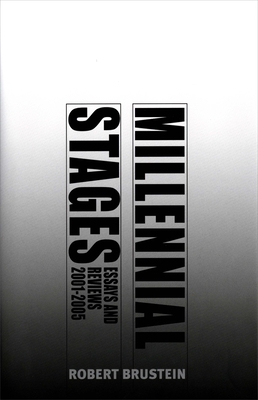 A major figure in the world of theater as critic, playwright, scholar, teacher, director, actor, and producer, Robert Brustein offers a unique perspective on the American stage and its artists. In this wise, witty, and wide-ranging collection of recent writings, Brustein examines crucial issues relating to theater in the post-9/11 years, analyzing specific plays, emerging and established performers, and theatrical production throughout the world. Brustein relates our theater to our society in a manner that reminds us why the performing arts matter.
Millennial Stages records Brustein’s thinking on the important issues “roiling the national soul” at the start of the twenty-first century. His opening section explores the connections between theater and society, theater and politics, and theater and religion, and it is followed by reviews of such landmark productions as The Producers and Spamalot, Long Day’s Journey into Night and King Lear. In his final section, Brustein reflects on people and places of importance in the world of theater today, including Marlon Brando and Arthur Miller and Australia and South Africa.

Robert Brustein, founding director of the American Repertory Theatre and of the Yale Repertory Theatre, has been a key figure in American theater for the last forty years. Drama  critic for The New Republic since 1959, he is  the author of fourteen books, seven plays, and twelve adaptations. Now Senior Research Fellow at Harvard University, he lives in Cambridge, MA, with his wife, Doreen Beinart.
or support indie stores by buying on
Copyright © 2020 American Booksellers Association