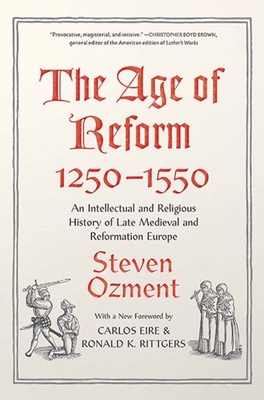 An Intellectual and Religious History of Late Medieval and Reformation Europe

Celebrating the fortieth anniversary of this seminal book, this new edition includes an illuminating foreword by Carlos Eire and Ronald K. Rittges

The seeds of the swift and sweeping religious movement that reshaped European thought in the 1500s were sown in the late Middle Ages. In this book, Steven Ozment traces the growth and dissemination of dissenting intellectual trends through three centuries to their explosive burgeoning in the Reformations—both Protestant and Catholic—of the sixteenth century. He elucidates with great clarity the complex philosophical and theological issues that inspired antagonistic schools, traditions, and movements from Aquinas to Calvin. This masterly synthesis of the intellectual and religious history of the period illuminates the impact of late medieval ideas on early modern society.

With a new foreword by Carlos Eire and Ronald K. Rittgers, this modern classic is ripe for rediscovery by a new generation of students and scholars.

Praise For The Age of Reform, 1250-1550: An Intellectual and Religious History of Late Medieval and Reformation Europe…

“Steven Ozment’s Age of Reform remains provocative, magisterial, and incisive; the indispensable guide to the complex web of deep continuities and radical changes in the religious and intellectual history of medieval and Reformation Europe.”—Christopher Boyd Brown, General Editor of the American Edition of Luther’s Works
“This new edition of Steven Ozment's work is crucial and timely. His expansive vision of the Reformation challenges us to reconsider how seismic changes in the sixteenth century influenced the development of religion in the West.”—Bruce Gordon, Yale University
"The Age of Reform remains the go-to textbook for a masterful account of the religious and intellectual histories of Reformation Europe framed within their medieval context. Its penetrating insights, alongside its eloquence and clarity, make it an enduring treasure."—G. Sujin Pak, Duke Divinity School
“Few historians have had the capacity to reach so large an audience with a study of such subtlety and originality. Steven Ozment brought to his work a restless search for truth and has given generations of students a window into a world undergoing a profound intellectual transformation.”—Andrew Pettegree, University of St. Andrews