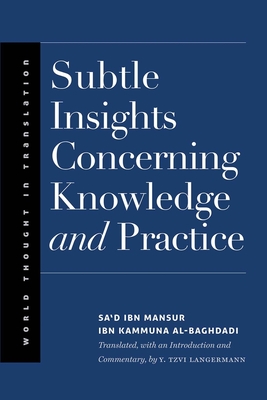 Written in the mid‑thirteenth century for the newly appointed governor of Isfahan, this compact treatise and philosophical guidebook includes a wide‑ranging and accessible set of essays on ethics, psychology, political philosophy, and the unity of God. Ibn Kammūna,a Jewish scholar writing in Baghdad during a time of Mongol occupation, was a controversial figure whose writings sometimes incited riots. He argued, among other things, the commonality of all monotheisms, both prophetic and philosophical. Here, for the first time in English, is a surprisingly modern work on the unity of all monotheistic regimes from a key medieval philosopher.

Sa‘d ibn Mansur Ibn Kammūna al-Baghdādī was a Jewish scholar writing in Baghdad during a time of Mongol occupation in the mid-thirteenth century.

Y. Tzvi Langermann is Professor of Arabic at Bar-Ilan University near Tel Aviv.

"A lucid translation of an important text in the Illuminationist tradition, accompanied by valuable notes and commentary."—Ali Gheissari, University of San Diego

"This book marks a milestone in scholarship on the interactions of Muslim and Jewish philosophy during the pre-modern period. Tzvi Langermann's annotated translation masterfully analyzes Ibn Kammūna's concise treatise of theoretical and practical philosophy, rendering it accessible to the modern reader."—Sabine Schmidtke, Professor of Islamic Intellectual History, Institute for Advanced Study

"A fascinating introduction to the thought of one of the most intriguing figures in Islamicate philosophy of the 13th century. A fine addition to the canon of post-classical philosophy in the Islamic world."—John Walbridge, Indiana University