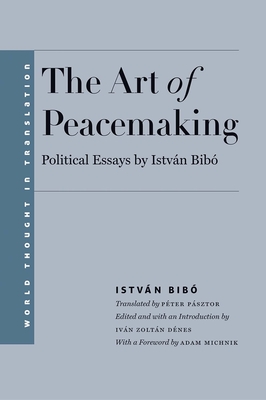 The Art of Peacemaking (Hardcover)

István Bibó (1911–1979) was a Hungarian lawyer, political thinker, prolific essayist, and minister of state for the Hungarian national government during the Hungarian Revolution of 1956. This magisterial compendium of Bibó’s essays introduces English-speaking audiences to the writings of one of the foremost theorists and psychologists of twentieth-century European politics and culture. Elegantly translated by Péter Pásztor and with a scholarly introduction by Iván Zoltán Dénes, the essays in this volume address the causes and fallout of European political crises, postwar changes in the balance of power among countries, and nation-building processes.

Political theorist István Bibó served as minister of state for the Hungarian national government. Iván Zoltán Dénes, an historian of ideas, is the founder of the István Bibó Center for Advanced Studies of Humanities and Social Sciences in Budapest, Hungary. Péter Pásztor is a freelance translator and editor.

Praise For The Art of Peacemaking: Political Essays by István Bibó (World Thought in Translation)…

“Bibó belonged to the group of “master thinkers” whose works were obligatory reading for those of us who were debating the nature of East European cultures, nationalism and the role of an intellectual in a totalitarian or authoritarian society. This edition will be the one to make Bibó’s distinctive voice heard and appreciated by English-language readers.”—Irena Grudzinska Gross, Princeton University

“István Bibó was the most important political thinker of twentieth-century Hungary.  His reflections on emotions in politics and on international conflict-resolution remain highly instructive.  This judiciously chosen selection of essays should finally introduce him to a large English-language readership.”—Jan-Werner Müller, author of Contesting Democracy: Political Ideas in Twentieth-Century Europe
— Jan-Werner Müller

“Reading these collections, it is Bibó’s strange, seemingly unwarranted faith in politics that most commands our attention.”—Holly Case, Dissent Magazine
— Holly Case
or
Not Currently Available for Direct Purchase
Copyright © 2020 American Booksellers Association