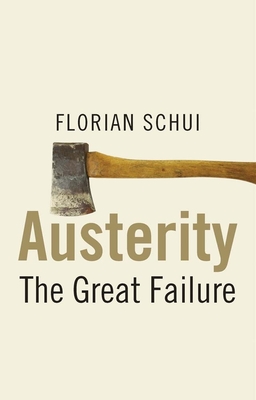 In times of economic crisis austerity becomes a rallying cry, but what does history tell us about its chances for success?

Austerity is at the center of political debates today. Its defenders praise it as a panacea that will prepare the ground for future growth and stability. Critics insist it will precipitate a vicious cycle of economic decline, possibly leading to political collapse. But the notion that abstinence from consumption brings benefits to states, societies, or individuals is hardly new. This book puts the debates of our own day in perspective by exploring the long history of austerity—a popular idea that lives on despite a track record of dismal failure.

Florian Schui shows that arguments in favor of austerity were—and are today—mainly based on moral and political considerations, rather than on economic analysis. Unexpectedly, it is the critics of austerity who have framed their arguments in the language of economics. Schui finds that austerity has failed intellectually and in economic terms every time it has been attempted. He examines thinkers who have influenced our ideas about abstinence from Aristotle through such modern economic thinkers as Smith, Marx, Veblen, Weber, Hayek, and Keynes, as well as the motives behind specific twentieth-century austerity efforts. The persistence of the concept cannot be explained from an economic perspective, Schui concludes, but only from the persuasive appeal of the moral and political ideas linked to it.

Praise For Austerity: The Great Failure…

“[I]t is an entertaining read and teaches us a lot about the difficulties of escaping one’s history even after a good few thousand years have passed.”—Vicky Pryce, The Independent
— Vicky Pryce

“As Florian Schui, an economic historian at the University of St Gallen in Switzerland, points out his elegantly written polemic, the word austerity derives from an ancient Greek term for ‘dryness of tongue’. . .Mr Schui’s book is a timely reminder of the moral confusion that swirls around the austerity debate”—The Economist
— The Economist

Florian Schui is an economic historian at the University of St. Gallen, Switzerland.
Loading...
or
Not Currently Available for Direct Purchase