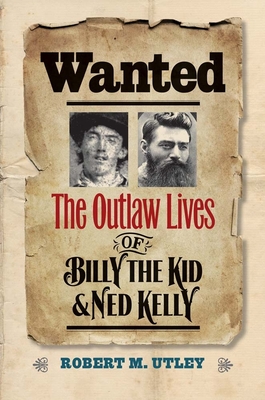 The oft-told exploits of Billy the Kid and Ned Kelly survive vividly in the public imaginations of their respective countries, the United States and Australia. But the outlaws’ reputations are so weighted with legend and myth, the truth of their lives has become obscure. In this adventure-filled double biography, Robert M. Utley reveals the true stories and parallel courses of the two notorious contemporaries who lived by the gun, were executed while still in their twenties, and remain compelling figures in the folklore of their homelands.

Robert M. Utley draws sharp, insightful portraits of first Billy, then Ned, and compares their lives and legacies. He recounts the adventurous exploits of Billy, a fun-loving, expert sharpshooter who excelled at escape and lived on the run after indictment for his role in the Lincoln Country War. Bush-raised Ned, the son of an Irish convict father and Irish mother, was a man whose outrage against British colonial authority inspired him to steal cattle and sheep, kill three policemen, and rob banks for the benefit of impoverished Irish sympathizers. Utley recounts the exploits of the notorious young men with accuracy and appeal. He discovers their profound differences, despite their shared fates, and illuminates the worlds in which they lived on opposite sides of the globe.

Robert M. Utley is an award-winning author of twenty-one books on western American history including Geronimo and The Last Days of the Sioux Nation. He lives in Scottsdale, AZ.

Praise For Wanted: The Outlaw Lives of Billy the Kid and Ned Kelly (The Lamar Series in Western History)…

“A marvelous dual biography of the most famous outlaws of their time. Even though the Kid hailed from New Mexico and Kelly from Australia, Utley ably draws distinctive parallels between their lives. A classic study for the ages.”—Douglas Brinkley, author of The Wilderness Warrior: Theodore Roosevelt and the Crusade for America
— Douglas Brinkley

“Robert M. Utley displays the gifts that have made him a storied interpreter of the nineteenth-century west. With all the crackling drama that defined Billy and Ned’s action-packed lives, he deftly illuminates each man’s character and sets his life against the background of wider conflicts over money, power, and race. Utley shows how each was, in his own violent way, extraordinary.”—T. J. Stiles, author of The First Tycoon, winner of the Pulitzer Prize and the National Book Award
— T.J. Stiles

“Brilliant idea! Billy the Kid and Ned Kelly didn’t have a lot in common, but together they make one helluva book. What makes this ‘comparison test’ fascinating is that the author gives you the facts and leaves you to decide for yourself. I’m still working on it.”— Frederick Nolan, author of The West of Billy the Kid
— Frederick Nolan

“Any book by the dean of western narrative historians is cause for celebration. Such is the case here. No one has written a book comparing one of the western demigods with a comparable legendary character from another culture. The achievement is one of a kind.”—Richard W. Etulain, author of The Life and Legends of Calamity Jane
— Richard W. Etulain

“Can a people be defined by the iconic outlaws they embrace? Historian Robert M. Utley tackles that question and many others in this enlightening comparison of the two most famous bad boys produced by the former British colonies of the United States and Australia. Utley, as usual, brings the past to life with graceful prose and powerful insights.”—Paul Andrew Hutton, Distinguished Professor, University of New Mexico
— Paul Andrew Hutton

“Outlaws or heroes, Billy the Kid and Ned Kelly have become immortal in their respective countries' folklore. Utley does an admirable job of describing how two young men, at odds with the authorities, could rise to such renown after their deaths.”—Glen Seeber, Oklahoman
— Glen Seeber

“Anyone who wants to broaden their view of history will want to read this book of comparative biographies of one of America’s prominent historians.”—David Steinberg, Sunday Journal
— David Steinberg
or
Not Currently Available for Direct Purchase
Copyright © 2020 American Booksellers Association