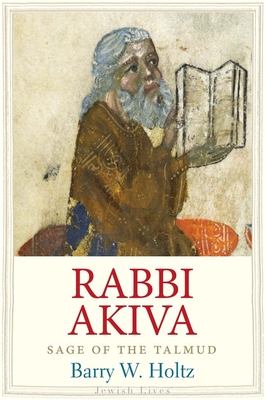 Sage of the Talmud (Jewish Lives)

From the prizewinning Jewish Lives series, a compelling and lucid account of the life and teachings of a founder of rabbinic Judaism and one of the most beloved heroes of Jewish history

Born in the Land of Israel around the year 50 C.E., Rabbi Akiva was the greatest rabbi of his time and one of the most important influences on Judaism as we know it today. Traditional sources tell how he was raised in poverty and unschooled in religious tradition but began to learn the Torah as an adult. In the aftermath of the destruction of Jerusalem by the Romans in 70 C.E., he helped shape a new direction for Judaism through his brilliance and his character. Mystic, legalist, theologian, and interpreter, he disputed with his colleagues in dramatic fashion yet was admired and beloved by his peers. Executed by Roman authorities for his insistence on teaching Torah in public, he became the exemplar of Jewish martyrdom.

Drawing on the latest historical and literary scholarship, this book goes beyond older biographies, untangling a complex assortment of ancient sources to present a clear and nuanced portrait of Talmudic hero Rabbi Akiva.

Praise For Rabbi Akiva: Sage of the Talmud (Jewish Lives)…

"Lively and thought-provoking. . . . A moving portrait of a humble intellectual giant. . . . As with other volumes in the Jewish Lives series, this biography works for experts and neophytes alike."—Publishers Weekly
"Well-read in the relevant literature, possessed of a lucid prose style, aiming to please all serious readers, Holtz sculpts a figure as lovable as he was loving."—Booklist
"One of the pleasures of Rabbi Akiva is seeing the way Holtz stitches together Akiva’s life from the stories about him in the midrashim and the Babylonian and the Jerusalem Talmud. . . . Holtz writes gracefully, inviting readers into the world of the Talmud and talmudic scholarship."—Maron L. Waxman, Jewish Book Council
"[Holtz’s] subtle sensibility results in a book that is instructive and enjoyable to scholar and layperson alike. . . . Rabbi Akiva is a book to be read again and again."—Burton L. Visotzky, The Forward
"Holtz expertly teases Akiva’s core character traits from a plethora of midrashic sources to fashion a complex, yet likeable, religious leader who is at once pragmatist and dreamer, punctilious intellectual and passionate lover."—Rabbi Dr Harvey Belovski, Jewish Chronicle
"Holtz muses aloud on the peculiarity of writing a 'biography' of Akiva, as we know nothing of Akiva outside of what we can glean from rabbinic sources. The book may be more a feat of talmudic interpretation than it is a conventional biography. But even if there is no outside corroboration of his life, Akiva is painted so fully over the course of classical Jewish texts that one understands why he can be considered as the 'hero' of the Talmud (with sagacity being the superpower of the rabbinic world)."—Howard Freedman, J: The Jewish News of Northern California
"Evokes a huge vista with clarity, wide learning, and elegance. . . . A valuable resource for those interested in learning about ancient Judaism."—Choice
"A significant study of one of the most important figures in rabbinic literature."—Randall C. Belinfant, Association of Jewish Libraries Review
"A warm-hearted, clear, and elegant meditation on the legacy of Akiva."—Daniel Asia, New Criterion
"Here is Rabbi Akiva as most readers have never seen him before: in the context of his time and through the lens of contemporary scholarship. More than a standard biography of a Talmudic sage, this is a story about how a new generation of scholars understands Judaism’s ancient rabbinic texts."—Jonathan D. Sarna, University Professor, Brandeis University
"Barry Holtz is ever the master educator and storyteller. He has poured 'new wine into old bottles,' and performed the difficult task of providing an original and insightful understanding of the incomparable Rabbi Akiva."—David Ellenson, Director, Schusterman Center for Israel Studies, Brandeis University
"Original . . . takes the best of contemporary scholarship into account."—Jeffrey Rubenstein, author of Talmudic Stories: Narrative Art, Composition, and Culture

Barry W. Holtz is Theodore and Florence Baumritter Professor of Jewish Education at the Jewish Theological Seminary of America. His five previous books include Back to the Sources: Reading the Classic Jewish Texts and Textual Knowledge: Teaching the Bible in Theory and in Practice, which received the National Jewish Book Award for education.
Loading...
or
Not Currently Available for Direct Purchase