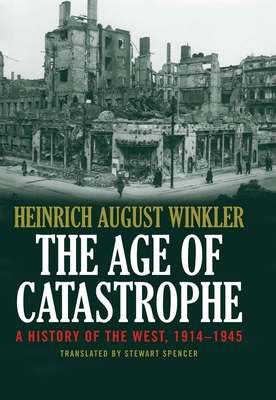 The Age of Catastrophe

Characterized by global war, political revolution and national crises, the period between 1914 and 1945 was one of the most horrifying eras in the history of the West. A noted scholar of modern German history, Heinrich August Winkler examines how and why Germany so radically broke with the normative project of the West and unleashed devastation across the world.

In this total history of the thirty years between the start of World War One and the dropping of atomic bombs on Hiroshima and Nagasaki, Winkler blends historical narrative with political analysis and encompasses military strategy, national identity, class conflict, economic development and cultural change. The book includes astutely observed chapters on the United States, Japan, Russia, Britain, and the other European powers, and Winkler’s distinctly European perspective offers insights beyond the accounts written by his British and American counterparts. As Germany takes its place at the helm of a unified Europe, Winkler’s fascinating account will be widely read and debated for years to come.

"Few authors have ever been as ambitious in attempting to chronicle the three crucial decades that spanned the World Wars . . . [The Age of Catastrophe] rises to the challenge. . . . it seamlessly weaves through the political and economic upheavals happening in the various nations of the Western world."—Carlo Valle, Military Review

"The Age of Catastrophe is testimony to the enduring hold that modernization narratives have over the historical imagination . . . The details of the account . . . radiate unimpeachable erudition and craftsmanship."—Stefan J. Link, Journal of Modern History

"An extraordinary tour de force. . . . An equally powerful and knowledgeable panorama of the western world in the era of its greatest disaster."—Ian Kershaw, author of Hitler

Heinrich August Winkler is one of Germany's leading historians and emeritus professor of history at Humboldt University in Berlin. Stewart Spencer is an acclaimed translator whose work includes biographies of Gustav Mahler, Richard Wagner, Cosima Wagner and W.A. Mozart, all published by Yale University Press.
Loading...
or
Not Currently Available for Direct Purchase