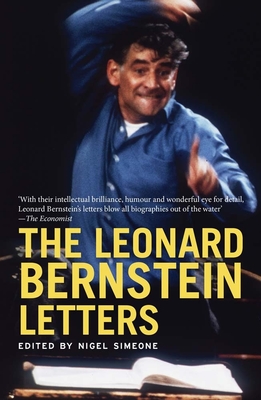 Leonard Bernstein was a charismatic and versatile musician—a brilliant conductor who attained international super-star status, and a gifted composer of Broadway musicals (West Side Story), symphonies (Age of Anxiety), choral works (Chichester Psalms), film scores (On the Waterfront), and much more. Bernstein was also an enthusiastic letter writer, and this book is the first to present a wide-ranging selection of his correspondence. The letters have been selected for the insights they offer into the passions of his life—musical and personal—and the extravagant scope of his musical and extra-musical activities. Bernstein’s letters tell much about this complex man, his collaborators, his mentors, and others close to him. His galaxy of correspondents encompassed, among others, Aaron Copland,Stephen Sondheim, Jerome Robbins, Thornton Wilder, Boris Pasternak, Bette Davis, Adolph Green, Jacqueline Kennedy Onassis, and family members including his wife Felicia and his sister Shirley. The majority of these letters have never been published before. They have been carefully chosen to demonstrate the breadth of Bernstein’s musical interests, his constant struggle to find the time to compose, his turbulent and complex sexuality, his political activities, and his endless capacity for hard work. Beyond all this, these writings provide a glimpse of the man behind the legends: his humanity, warmth, volatility, intellectual brilliance, wonderful eye for descriptive detail, and humor.

"What terrifying letters you write: fit for the flames is what they are. Just imagine how much you would have to pay to retrieve such a letter forty years from now when you are conductor of the Philharmonic."—Aaron Copland to Leonard Bernstein in 1940

“The Leonard Bernstein Letters. . .contains so much that is startling and unknown that all past books, including his own, become instantly inadequate. Don’t take my word for it. On the jacket, Bernstein’s official biographer, Humphrey Burton, declares that, with this book in hand, ‘I want to start all over again.’”—Norman Lebrecht, Standpoint Magazine
— Norman Lebrecht

“[O]pinions [are] expressed with force and often with elegance in his correspondence with performers, composers, publishers, promoters and many other else, as revealed in TheLeonard Bernstein Letters, edited by the eminent Bernstein scholar Nigel Simeone.”—Christopher Morley, Birmingham Post,
— Christopher Morley

“This volume has been handsomely edited, and the decision to include letters from Bernstein's correspondents results in a rich portrayal of a particular age of privilege...”—Philip Hensher, The Guardian
— Philip Hensher

“[H]ats off to Nigel Simeone for his painstaking research into the myriad references in Bernstein’s correspondence. Concerts, recordings, broadcasts, travel dates, parties, you name it, they are all meticulously recorded in the brilliant footnotes to this large collection of letters. . .a magisterial survey. . ..”—Fiona Clampin, Classical Music
— Fiona Clampin

"Top of my list for music books this Christmas has to be the new compendium of Leonard Bernstein’s Collected Letters which are brilliantly written, seriously engaging, and strangely contradictory, in the way that Bernstein was himself a mass of fascinating contradictions – egocentric/loving, boastful/blisteringly honest, gay/straight; with a curious ambivalence, for a Jew, towards the remnants of the Third Reich."
—Ham & High
— Ham & High

“[W]hat emerges is an absorbing and highly readable portrait of a complex, larger-than-life character nicely described by a fellow-composer as ‘one of the blessed ones who make everything they encounter come alive.'”—Anthony Burton, BBC Music Magazine
— Anthony Burton

“Offering 650 letters, this book is a major event in the documentation of the life and work of one of the greatest American musicians, who still exercises an enormous influence through his revelatory records.”—Peter Dickinson, Gramophone Magazine
— Peter Dickinson