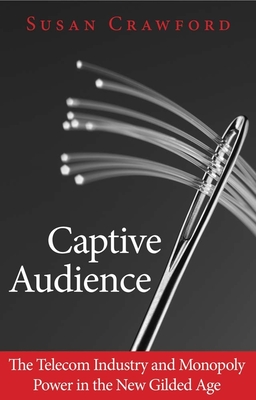 Why Americans are paying much more for Internet access,and getting much less

Ten years ago, the United States stood at the forefront of the Internet revolution. With some of the fastest speeds and lowest prices in the world for high-speed Internet access, the nation was poised to be the global leader in the new knowledge-based economy. Today that global competitive advantage has all but vanished because of a series of government decisions and resulting monopolies that have allowed dozens of countries, including Japan and South Korea, to pass us in both speed and price of broadband. This steady slide backward not only deprives consumers of vital services needed in a competitive employment and business market—it also threatens the economic future of the nation.

This important book by leading telecommunications policy expert Susan Crawford explores why Americans are now paying much more but getting much less when it comes to high-speed Internet access. Using the 2011 merger between Comcast and NBC Universal as a lens, Crawford examines how we have created the biggest monopoly since the breakup of Standard Oil a century ago. In the clearest terms, this book explores how telecommunications monopolies have affected the daily lives of consumers and America's global economic standing.

Susan Crawford is a visiting professor at Harvard Law School and a fellow at the Roosevelt Institute. She lives in New York City.
Loading...
or
Not Currently Available for Direct Purchase