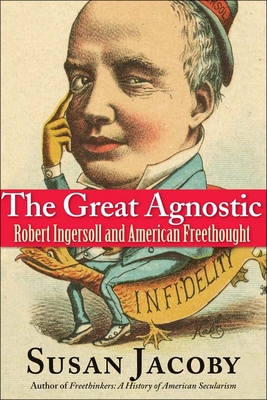 "Jacoby makes the case that Americans are dearly indebted to Ingersoll, and would be well-served to revisit his life and writings at a time when religious thought continues to be a divisive force in American civic life."—Mythili Rao, The Daily Beast

During the Gilded Age, which saw the dawn of America’s enduring culture wars, Robert Green Ingersoll was known as “the Great Agnostic.” The nation’s most famous orator, he raised his voice on behalf of  Enlightenment reason, secularism, and the separation of church and state with a vigor unmatched since America’s revolutionary generation. When he died in 1899, even his religious enemies acknowledged that he might have aspired to the U.S. presidency had he been willing to mask his opposition to religion. To the question that retains its controversial power today—was the United States founded as a Christian nation?—Ingersoll answered an emphatic no.

In this provocative biography, Susan Jacoby, the author of Freethinkers: A History of American Secularism, restores Ingersoll to his rightful place in an American intellectual tradition extending from Thomas Jefferson and Thomas Paine to the current generation of  “new atheists.” Jacoby illuminates the ways in which America’s often-denigrated and forgotten secular history encompasses issues, ranging from women’s rights to evolution, as potent and divisive today as they were in Ingersoll’s time. Ingersoll emerges in this portrait as one of the indispensable public figures who keep an alternative version of history alive. He devoted his life to that greatest secular idea of all—liberty of conscience belonging  to the religious and nonreligious alike.


Praise For The Great Agnostic: Robert Ingersoll and American Freethought…

Won Honorable Mention in the 2013 Great Midwest Book Festival for the Biography/Autobiography category, given by JM Northern Media LLC

"Jacoby succeeds in capturing Ingersoll's remarkable appeal across sectarian and political boundaries. His warmth, humor, tolerance, and rhetorical skill are vividly conveyed, and they are validated by much contemporaneous testimony from figures who would ordinarily have been expected to shun an infamous blasphemer."—Frederick Crews, University of California, Berkeley

"As someone who did brave battle with narrow-minded fundamentalists in his own day, Robert Ingersoll would surely be appalled at the political influence of their heirs today. But their very rise makes Susan Jacoby’s fine, compact and judicious account of Ingersoll’s life and ideas all the more important. She has given us a splendid intellectual portrait of an American who deserves to be far better known."—Adam Hochschild, author of Bury the Chains and To End All Wars

"Robert Ingersoll used his wit to blast the absurdities of religion, while his warmth kept him close to his audiences. He has found his perfect biographer in Susan Jacoby, who uses his story to provide deep insights not only into Ingersoll’s century but our own."—Rebecca Newberger Goldstein, author of 36 Arguments for the Existence of God: A Work of Fiction

"Susan Jacoby has written a necessary, informative, and intelligent survey of the life, times, and writings of a most neglected figure in American history. A serious and thoughtful reflection on a topic of interest to historians, humanists, and social scientists, let alone general readers, The Great Agnostic will deepen one of the most important of contemporary debates."—Alan Wolfe, author of The Future of Liberalism

Susan Jacoby is the author of numerous books, including Freethinkers: A History of American Secularism,The Age of American Unreason, Alger Hiss and the Battle for History, and The Last Men on Top, a recently published eBook. She lives in New York City.
Loading...
or
Not Currently Available for Direct Purchase