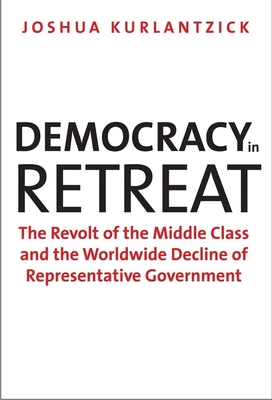 A challenge to conventional wisdom about the spread of democracy

Since the end of the Cold War, the assumption among most political theorists has been that as nations develop economically, they will also become more democratic—especially if a vibrant middle class takes root. This assumption underlies the expansion of the European Union and much of American foreign policy, bolstered by such examples as South Korea, the Philippines, Taiwan, and even to some extent Russia. Where democratization has failed or retreated, aberrant conditions take the blame: Islamism, authoritarian Chinese influence, or perhaps the rise of local autocrats.

But what if the failures of democracy are not exceptions? In this thought-provoking study of democratization, Joshua Kurlantzick proposes that the spate of retreating democracies, one after another over the past two decades, is not just a series of exceptions. Instead, it reflects a new and disturbing trend: democracy in worldwide decline. The author investigates the state of democracy in a variety of countries, why the middle class has turned against democracy in some cases, and whether the decline in global democratization is reversible.

Joshua Kurlantzick is a fellow at the Council on Foreign Relations and a frequent contributor to publications including Time, the New Republic, the American Prospect, and Mother Jones.

Praise For Democracy in Retreat: The Revolt of the Middle Class and the Worldwide Decline of Representative Government (Council on Foreign Relations Books)…

"This book offers a very well-informed and global exploration of political developments over the past decade, with a particular emphasis on the state of democracy. Kurlantzick brings it all together in a unique, original, and compelling manner."—Brian Joseph, Senior Director, Asia and Global Programs, National Endowment for Democracy

"Simply put, Kurlantzick raises the specter of a world where democracy is in full retreat. But this book accomplishes much more than a simple hand wringing over the problem. It conscientiously works through the major factors that are eating away at new and more established democracies and preventing the establishment of future ones. Kurlantzick shines in bringing to the fore something previously ignored. Few—if any—other books cover the topic so soundly and broadly, and for the future safety, security, and international position of the U.S., it is of vital importance."—Samantha F. Ravich, Ph.D., author of Marketization and Democracy: East Asian Experiences