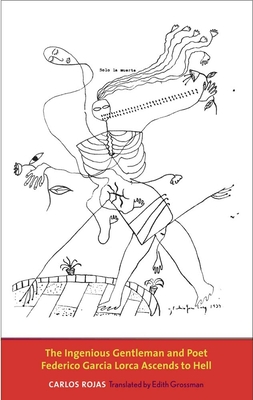 In Carlos Rojas’s imaginative novel, the Spanish poet Federico García Lorca, murdered by Francoist rebels in August 1936, finds himself in an inferno that somehow resembles Breughel’s Tower of Babel. He sits alone in a small theater in this private hell, viewing scenes from his own life performed over and over and over. Unexpectedly, two doppelgängers appear, one a middle-aged Lorca, the other an irascible octogenarian self, and the poet faces a nightmarish confusion of alternative identities and destinies.

Carlos Rojas uses a fantastic premise—García Lorca in hell—to reexamine the poet’s life and speculate on alternatives to his tragic end. Rojas creates with a surrealist’s eye and a moral philosopher’s mind. He conjures a profoundly original world, and in so doing earns a place among such international peers as Gabriel García Márquez, Philip Roth, J. M. Coetzee, and José Saramago.

A novelist, an art historian, and since the age of fifty a creator of visual works of art, Carlos Rojas is Charles Howard Candler Professor of Spanish Emeritus at Emory University. He has received numerous important Spanish literary prizes, including the Premio Nadal. Edith Grossman is a renowned translator of works by major Latin American and Peninsular writers.
Loading...
or
Not Currently Available for Direct Purchase