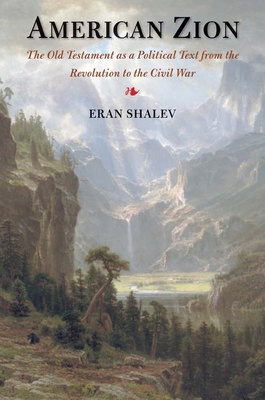 The Bible has always been an integral part of American political culture. Yet in the years before the Civil War, it was the Old Testament, not the New Testament, that pervaded political rhetoric. From Revolutionary times through about 1830, numerous American politicians, commentators, ministers, and laymen depicted their young nation as a new, God-chosen Israel and relied on the Old Testament for political guidance.

In this original book, historian Eran Shalev closely examines how this powerful predilection for Old Testament narratives and rhetoric in early America shaped a wide range of debates and cultural discussions—from republican ideology, constitutional interpretation, southern slavery, and more generally the meaning of American nationalism to speculations on the origins of American Indians and to the emergence of Mormonism. Shalev argues that the effort to shape the United States as a biblical nation reflected conflicting attitudes within the culture—proudly boastful on the one hand but uncertain about its abilities and ultimate destiny on the other. With great nuance, American Zion explores for the first time the meaning and lasting effects of the idea of the United States as a new Israel and sheds new light on our understanding of the nation’s origins and culture during the founding and antebellum decades.

Eran Shalev is a senior lecturer in the History Department at Haifa University, Israel.

Praise For American Zion: The Old Testament as a Political Text from the Revolution to the Civil War…

“American Zion offers a revelatory account of how Hebraism shaped the American political, literary, and religious imagination during the first century of our national life.  Eran Shalev demonstrates unforgettably that when Americans referred to themselves as the “new Israel,” they were not speaking metaphorically.”— Eric Nelson, Harvard University

“This well-researched, creatively argued, historiographically well-informed, and genuinely insightful book is an impressive piece of work and should have a broad appeal."—Mark Noll, University of Notre Dame

“An illuminating study of the Old Testament’s political influence from the American Revolution to the Civil War. Shalev has made an outstanding contribution to the conversation around one of the most accepted religious constructions of American exceptionalism in recent historiography.”—James P. Byrd, Vanderbilt University

“In this erudite, readable, and exciting new book, Eran Shalev takes the reader to previously uncharted biblical waters He breaks new ground by presenting a unified vision of an “American political theology.” I would present this book as an exemplary model for how to “do” history in relation to theology.”—Shalom Goldman, Duke University

“American Zion represents the best of intellectual history . . . . Readers will recognize . . . the outstanding achievement that this book represents and the very real contributions it makes.”—Alexis McCrossen, Journal of the Early Republic
— Alexis McCrossen

“So packed with insights . . . that one stands in awe of what it accomplishes. . . . a resounding success . . . insightful and rewarding . . . a powerful argument [and] a welcome addition to early American political thought.”—Paul C. Gutjahr, Journal of American History
— Paul C. Gutjahr

"[Shanlev's] American Zion deserves praise for its innovative understanding of American republicanism and its insistence on the importance of the Bible outside the pew and nightstand.....[A] significant book that scholars of this era will find useful and interesting."—Joseph W. Pearson, Southern Historian
— Joseph W. Pearson