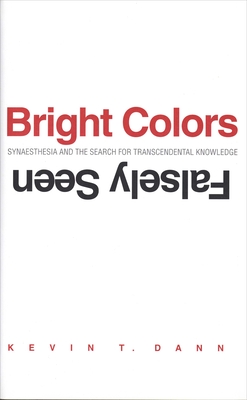 Synaesthesia and the Search for Transcendental Knowledge

In a conversation with his physician, a nineteenth-century resident of Paris who lived near the railroad described sensations of brilliant color generated by the sounds of trains passing in the night. This patient—a synaesthete—experienced "color hearing" for letters, words, and most sounds. Synaesthesia, a phenomenon now known to science for over a century, is a rare form of perception in which one sense may respond to stimuli received by other senses. This fascinating book provides the first historical treatment of synaesthesia and a closely related mode of perception called eideticism. Kevin Dann discusses divergent views of synaesthesia and eideticism over the last hundred years and explores the controversies over the significance of these unusual modes of perception. Celebrated at the turn of the century as a uniquely creative form of consciousness, synaesthesia became embroiled in a debate between Romantics who championed it as a desirable harbinger of a new, more spiritual age, and positivists who denounced it as primitive and irrational. The author debunks Romantic notions of the transcendental nature of synaesthesia and shows that although novelist Vladimir Nabokov was a true synaesthete and eidetic, other individuals the Romantics considered synaesthetes were not. Drawing on studies of autism and hallucinogenic drugs, Dann offers new perspectives on synaesthesia and eideticism and how they relate to the evolution of human consciousness.

Kevin Dann is lecturer in the Department of History at Rutgers University.
Loading...
or support indie stores by buying on