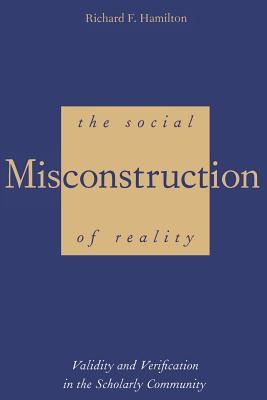 The Social Misconstruction of Reality

Validity and Verification in the Scholarly Community

From the time of the ancient Greeks, thinkers have known the earth is round. Yet popular legend has persisted that Columbus proved this fact for the first time, and scholarship abounds with similar perpetuated errors. Why do social misconstructions—widely shared, long-lasting acceptance of facts or interpretations that are mistaken—persist when ample evidence is readily available to counter them? How and why are corrections resisted or dismissed? In this provocative book Richard F. Hamilton examines the social determinants of knowledge, focusing on three well-accepted but erroneous social theories and looking closely at the ways social misconstructions originate and thrive.

Hamilton finds that despite critiques by historians, some scholars continue to believe Max Weber's claim that a strong linkage between Protestantism and worldly success led to the rise of the capitalist West. Similarly, many academics still argue the discredited view that the German lower middle class voted overwhelmingly for the Nazis. Foucault's flawed interpretation of the "birth of prison" and other disciplinary concepts in modern society finds wide acceptance in many academic circles, despite a lack of serious empirical support. In each of these three cases, the author assesses the logic and empirical accuracy of the accepted theory and alternative theories, and he investigates the social processes giving rise to misconstructions. He finds a remarkable disparity between the presumed commitment of scholars to evidence and their easy acceptance of undocumented argument. His book sounds a clear alert to the academic community.

Richard F. Hamilton is professor of sociology and political science at Ohio State University.
Loading...
or support indie stores by buying on