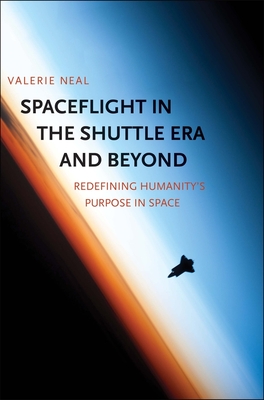 Spaceflight in the Shuttle Era and Beyond

The thirty years of Space Shuttle flights saw contrary changes in American visions of space. Valerie Neal, who has spent much of her career examining the Space Shuttle program, uses this iconic vehicle to question over four decades’ worth of thinking about, and struggling with, the meaning of human spaceflight. She examines the ideas, images, and icons that emerged as NASA, Congress, journalists, and others sought to communicate rationales for, or critiques of, the Space Shuttle missions. At times concurrently, the Space Shuttle was billed as delivery truck and orbiting science lab, near-Earth station and space explorer, costly disaster and pinnacle of engineering success. The book’s multidisciplinary approach reveals these competing depictions to examine the meaning of the spaceflight enterprise. Given the end of the Space Shuttle flights in 2011, Neal makes an appeal to reframe spaceflight once again to propel humanity forward.


Praise For Spaceflight in the Shuttle Era and Beyond: Redefining Humanity's Purpose in Space…

This book is one of the best . . . on the state of space policy and the future of NASA.”—Choice

“One of the best I have read on space policy and the future of NASA.”—John Kiss, The Chronicle of Higher Education

“A very thoughtful analysis, which will surely spur more scholarship on the subject”—Monique Laney, Technology and Culture

Valerie Neal was selected to receive the American Institute of Aeronautics and Astronautics 2019 Gardner-Lasser Aerospace History Literature Award for her book, Spaceflight in the Shuttle Era and Beyond: Redefining Humanity’s Purpose in Space.

“Valerie Neal may be the one person who knows the space shuttle program better than the astronauts who flew this iconic vehicle. Her book casts new light on the program, exploring its cultural significance through a thoughtful analysis. As one who lived this history, I gained much from her broader perspective and deep insights.”—Kathryn D. Sullivan, retired NASA astronaut and former Administrator of the National Oceanic and Atmospheric Administration

“The Space Shuttle has finally found its historian. Neal explores the meaning of this technology and its place in American culture in this most welcome addition to the historical literature on NASA and the astronauts.”—Roger D. Launius, former Associate Director of Collections and Curatorial Affairs, Smithsonian National Air and Space Museum

"Valerie Neal gives us an engaging exploration of the iconic spaceplane, capturing the soul of the shuttle and its astronauts. Her vivid shuttle saga is a 'Go!'"—Tom Jones, four-time shuttle astronaut and author of Sky Walking: An Astronaut's Memoir

“Neal’s book is a much needed look at how to create a cultural narrative for human spaceflight that resonates with millennials rather than the Apollo generation. Quite valuable.”—Marcia Smith, Editor, SpacePolicyOnline.com

“Given the book's scope and Valerie Neal's status as a Space Shuttle expert, Spaceflight in the Shuttle Era and Beyond is certain to become a resource for all those interested in space history.”—Matthew Hersch, author of Inventing the American Astronaut

Valerie Neal chairs the space history department at the Smithsonian National Air and Space Museum, a role that includes overseeing the human spaceflight collections from the space shuttle and International Space Station programs. Her previous books include Discovery: Champion of the Space Shuttle Fleet.
Loading...
or
Not Currently Available for Direct Purchase