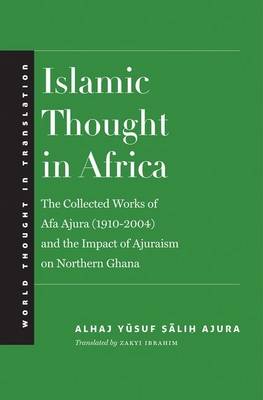 This is the first English translation of and commentary on the collected poems of Alhaj Yūsuf Ṣāliḥ Ajura (1910–2004), a northern Ghanaian orthodox Islamic scholar, poet, and polemicist known as Afa Ajura, or “scholar from Ejura.” The poems, all handwritten in Arabic script, mainly in the Ghanaian language of Dagbani and also Arabic, explore the author’s socio‑religious beliefs. In the accompanying introduction, the translator examines the diverse themes of the poems and how they challenge Tijāniyyah Sufi clerics and traditional practices such as idol worship.


Praise For Islamic Thought in Africa: The Collected Works of Afa Ajura (1910-2004) and the Impact of Ajuraism on Northern Ghana (World Thought in Translation)…

“If there is anyone who can make us see the world through the poetry of Ajura, it is Zakyi. Kinship, grooming, cleanliness, and the noble art of fostering children are woven into the narrative, which spans religion, culture and history; this work is un-put-down-able, and is a must-read.”—Abdulai Salifu Asuro, Madina Institute of Science and Technology


“Islamic Thought in Africa is a welcome addition to our understanding of how the use of Ajami is crucial to our interpretation of Muslim societies and African history."—Abdulai Iddrisu, St. Olaf College

Alhaj Yūsuf Sālih Ajura (1910–2004) was an orthodox Islamic scholar, poet, and polemicist from northern Ghana. Zakyi Ibrahim is professor and chair of the Religious Studies Department at California State University, Fullerton.
Loading...
or support indie stores by buying on