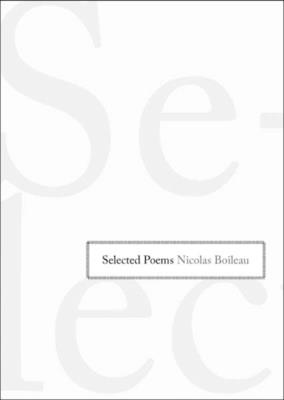 French poet and critic Nicolas Boileau-Despréaux (1636-1711) was by turns venerated (in the eighteenth century) and reviled (in the nineteenth century) as the lawgiver of French classicism. Today critics see his achievement as more varied and complex than the label of classicism generally allows. This selection of Boileau’s poems, translated with spirit and carefully annotated by Burton Raffel, brings the work of Boileau to English-speaking readers for the first time in a generation.

Much admired for his wit and ingenuity, Boileau perceived the role of the satirist as the scourge of bad writing and delighted in the notion of “l’ami du vrai,” the brash truth-teller and enemy of humbug, inflation, and equivocation. Raffel’s translations, vigorous and engaging, preserve the meaning of Boileau’s poems and invite today’s reader to enjoy the poet’s astute perceptions. Julia Prest’s insightful introduction to the volume provides an overview of Boileau’s life and achievement.

Burton Raffel is Distinguished Professor of Arts and Humanities Emeritus and professor of English emeritus, University of Louisiana at Lafayette. He lives in Lafayette. His many works of translation include the narrative poems of Chrétien de Troyes, Candide, and Das Nibelungenlied, all published by Yale University Press. Julia Prest is assistant professor of French, Yale University.
Loading...
or support indie stores by buying on