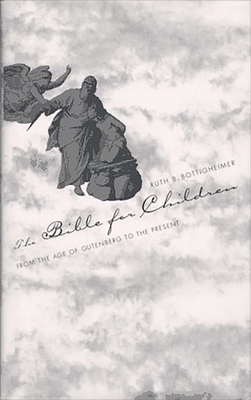 The Bible for Children

From the Age of Gutenberg to the Present

For more than five centuries, parents, teachers, and preachers in Europe and America have written and illustrated Bibles especially for children. These children's Bibles vary widely, featuring different stories, various interpretations, and markedly divergent illustrations, despite their common source. How children's Bibles differ, and why, is the subject of this groundbreaking book, the first to recognize children's Bibles as a distinct genre with its own literary, historical, and cultural significance.

Comparing European and American children's Bibles, Ruth B. Bottigheimer reveals how the cultural standards and social attitudes of adults who tell Bible stories to children affect the selection and interpretation of Old and New Testament stories. She also analyzes many familiar Bible tales—for example, the parting of the Red Sea, the Garden of Eden, and the Crucifixion—to see what they tell us about the Protestant, Catholic, and Jewish societies that presented them to children. Bottigheimer finds that even disparate religious groups transformed Bible stories for their young according to a common pattern: stories initially stayed close to scriptural text, then troubling passages underwent revisions, and finally a thoroughgoing amendment of the story emerged. Numerous engaging illustrations throughout this book underscore the fascinating variety among children's Bibles of different eras and cultures.

Ruth B. Bottigheimer, adjunct associate professor in the Department of Comparative Studies at the University at Stony Brook, is also the author of Grimm's Bad Girls and Bold Boys, published by Yale University Press.
Loading...
or support indie stores by buying on