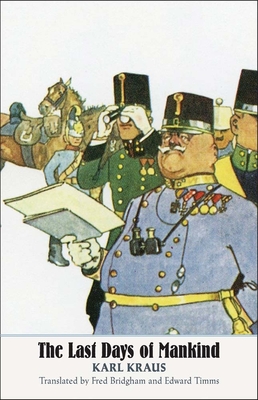 The Last Days of Mankind (Hardcover)

The Complete Text (The Margellos World Republic of Letters)

Kraus’s iconic WWI drama, a satirical indictment of the glory of war, now in English in its entirety for the first time

One hundred years after Austrian satirist Karl Kraus began writing his dramatic masterpiece, The Last Days of Mankind remains as powerfully relevant as the day it was first published. Kraus’s play enacts the tragic trajectory of the First World War, when mankind raced toward self-destruction by methods of modern warfare while extolling the glory and ignoring the horror of an allegedly “defensive” war. This volume is the first to present a complete English translation of Kraus’s towering work, filling a major gap in the availability of Viennese literature from the era of the War to End All Wars.

Bertolt Brecht hailed The Last Days as the masterpiece of Viennese modernism. In the apocalyptic drama Kraus constructs a textual collage, blending actual quotations from the Austrian army’s call to arms, people’s responses, political speeches, newspaper editorials, and a range of other sources. Seasoning the drama with comic invention and satirical verse, Kraus reveals how bungled diplomacy, greedy profiteers, Big Business complicity, gullible newsreaders, and, above all, the sloganizing of the press brought down the Austro-Hungarian Empire. In the dramatization of sensationalized news reports, inurement to atrocities, and openness to war as remedy, today’s readers will hear the echo of the fateful voices Kraus recorded as his homeland descended into self-destruction.

The Austrian Jewish author Karl Kraus (1874–1936) was the foremost German-language satirist of the twentieth century. As editor of the journal Die Fackel (The Torch) he conducted a sustained critique of propaganda and the press, expressed through polemical essays, witty aphorisms, and resonant poems. Edward Timms, founding director of the University of Sussex Centre for German-Jewish Studies, is best known for his two-volume study Karl Kraus—Apocalyptic Satirist. The title of his memoirs, Taking Up the Torch, reflects his long-standing interest in Kraus’s journal. Fred Bridgham is the author of wide-ranging studies in German literature, history, and the history of ideas. His translations of lieder and opera include Hans Werner Henze’s The Prince of Homburg for performance by English National Opera.

Praise For The Last Days of Mankind: The Complete Text (The Margellos World Republic of Letters)…

“[A] remarkable achievement—in a translation by Fred Bridgham and Edward Timms that is itself a remarkable achievement . . . The Last Days of Mankind, Kraus’ unsparing evisceration of Austrian hypocrisy during World War I, deserves to be considered one of the classics of that war’s literature, and like all great works, its specific criticisms continue to resonate a century later.”—Mitchell Abidor, Jewish Currents
— Mitchell Abidor