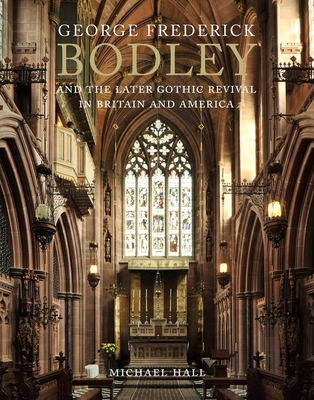 British architect George Frederick Bodley (1827–1907) fundamentally shaped the architecture, art, and design of the Anglican Church throughout England and the world; his work survives in the United States, Australia, India, and Italy, as well as the United Kingdom. This important book is the first to explore the life and work of this major Gothic Revival architect, a man with an evolving outlook on style and aesthetics who believed that every element of a building must be part of an integrated design strategy. A close colleague of William Morris and Edward Burne-Jones, Bodley was the first major patron of Morris’s stained glass and, like Morris, was an accomplished textile and wallpaper designer. In 1874 Bodley founded Watts and Company—now celebrating its 140th anniversary—to manufacture ecclesiastical vestments, textiles, and wallpapers. In a seamless blend of architectural, art, and church history, this lavish volume features over 200 illustrations and offers impeccable scholarship on the work of an influential visionary of Victorian design.

Michael Hall is a noted architectural historian and the author of several books on Victorian architecture and the Gothic Revival.

'George Frederick Bodley was the finest and most consistent practitioner of High Victorian Gothic architecture, and as such he richly merits this scholarly, well-illustrated and beautifully produced monograph. . .Hall gives us a vivid portrait of this spirited porcupine, analysing his principles and his undeviating pursuit of beauty (as he saw it). . .This is a great book to honour a great architect.’—Peyton Skipwith, Literary Review
— Peyton Skipwith

‘Michael Hall and Yale have combined to give him the magnificent tombstone tomb he deserves, academically disciplined, enthusiastically argued, flatteringly illustrated, merrily readable about his life as well as his art, his many pupils and assistants the subject of a useful appendix… I suspect this is a great book; it is certainly the surprise of the year.’—Brian Sewell, Evening Standard.
— Brian Sewell

“One of the finest monographs on any English architect produced in a very long time. . . . All lovers of the architecture of the late nineteenth and early twentieth centuries would be remiss in not having Mr. Hall’s book on their shelves.”—Evan McWilliams, Sacred Architecture
— Evan McWilliams
or
Not Currently Available for Direct Purchase
Copyright © 2020 American Booksellers Association