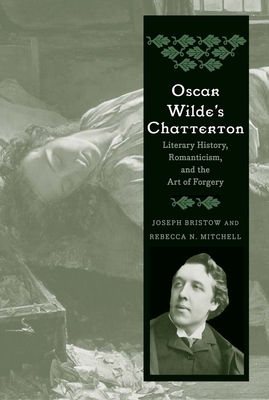 Literary History, Romanticism, and the Art of Forgery

In Oscar Wilde’s Chatterton, Joseph Bristow and Rebecca N. Mitchell explore Wilde’s fascination with the eighteenth-century forger Thomas Chatterton, who tragically took his life at the age of seventeen. This innovative study combines a scholarly monograph with a textual edition of the extensive notes that Wilde took on the brilliant forger who inspired not only Coleridge, Wordsworth, and Keats but also Victorian artists and authors. Bristow and Mitchell argue that Wilde’s substantial “Chatterton” notebook, which previous scholars have deemed a work of plagiarism, is central to his development as a gifted writer of criticism, drama, fiction, and poetry. This volume, which covers the whole span of Wilde’s career, reveals that his research on Chatterton informs his deepest engagements with Romanticism, plagiarism, and forgery, especially in later works such as “The Portrait of Mr. W. H.,” The Picture of Dorian Gray, and The Importance of Being Earnest. Grounded in painstaking archival research that draws on previously undiscovered sources, Oscar Wilde’s Chatterton explains why, in Wilde’s personal canon of great writers (which included such figures as Charles Baudelaire, Gustave Flaubert, Théophile Gautier, and Dante Gabriel Rossetti), Chatterton stood as an equal in this most distinguished company.

Praise For Oscar Wilde's Chatterton: Literary History, Romanticism, and the Art of Forgery…

“This book has the potential to transform our understanding not only of Wilde and his oeuvre, but also the notions of authenticity and originality that still exert a pervasive influence on literary history.”—Nicholas Frankel, author of Oscar Wilde’s Decorated Books
— Nicholas Frankel

“By establishing the significance of Chatterton for Wilde and for the nineteenth century as a whole, the authors invite us to reconsider what we mean when we complain of ‘plagiarism.’ A revelation—and not just for Wildeans.”—John Stokes, King’s College London
— John Stokes

“This is a major, unrivalled accomplishment, of consequence both in Wilde studies and in the literary-cultural history of forgery and creative imagination.”—Susan J. Wolfson, Princeton University
— Susan J. Wolfson

“An impressive work of scholarship, this book, using previously unpublished archival material, not only thoroughly explores the Chatterton-Wilde connection but also presents credible evidence that Wilde's ‘Chatterton’ notebook was not an act of forgery.”?Library Journal
— Library Journal

“Thoroughly researched and written with clarity and intelligence, this volume includes detailed footnotes and references to outside resources.”—Choice
— Choice