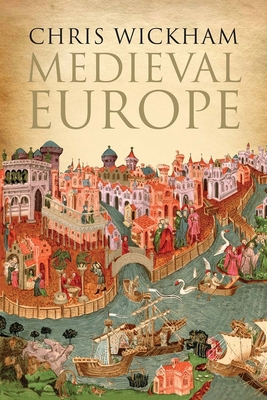 "A dazzling race through a complex millennium."—Publishers Weekly

"A thorough survey of the European continent in the time between antiquity and modernity. . . . Far-ranging, fluent, and thoughtful—of considerable interest to students of history writ large, and not just of Europe."—Kirkus Reviews (starred review)

“Wickham’s interpretation of the European Middle Ages is one of vibrancy and dynamism, a welcome reminder of why many people find this period fascinating.”—Jonathan R. Lyon, Journal of Interdisciplinary History


"Historians of the medieval period and beyond, however, should benefit from Wickham’s particular vision of the Middle Ages as a series of major turning points knit together by structural forces. His assessment of the respective roles played by various elements in this tapestry is thought provoking."—Robert Sutherland-Harris, Renaissance and Reformation

“Medieval Europe is a testament to Chris Wickham’s authoritative command of the material and to his clarity of thought . . . thought-provoking.”—James Davis, Renaissance Quarterly

“[The] broad purview, memorable terseness, and focus on what is important make this book well worth reading.”—Lawrence G. Duggan, Anglican and Episcopal History

"Writing with great wit, style and clarity, Chris Wickham presents to us a powerful account of the middle ages as a period of considerable dynamism and massive change. Emperors, popes, theologians, knights and mystics are found herein, but so too are cities, peasants, merchants, and the material experiences of the many and not just the few. Above all else, Wickham shows us the economic and structural bones beneath the skin. This is the middle ages that the twenty-first century needs to know about – not the gaudy antithesis of 'modernity' but the centuries of human toil, ingenuity and compromise in which real people made choices, albeit not in circumstances of their own choosing."—John Arnold, Professor of Medieval History, University of Cambridge

"Medieval Europe is a model of clarity and accessibility, the superlative answer to a challenge taken up by an eminent and wide-ranging historian: to interpret the history of a millennium in 250 pages. This yields a sense of intellectual adventure that remains compelling throughout, as Chris Wickham engages his readers in his arguments, choices and interpretations, and keeps them on their toes."—Mayke de Jong, Utrecht University

"This is tremendously good. Chris Wickham has an outstandingly keen and understanding eye for the diversities of life across a broadly-framed Europe, and for changes over time. Impressive geographic reach is combined with nuance, and a keen sense of the particularities of different historical landscapes. The author continually makes illuminating connections and comparisons, and does not flinch from offering clear judgments or nailing his own colours to the mast. Indeed, he has a consistently refreshing ability to get the reader away from predictable or ingrained ways of thinking about and judging things."—Len Scales, University of Durham

"Fascinating, judicious, authoritative: by far the best single book about the Middle Ages. I wish this had been around earlier in my teaching career. Perhaps Wickham's most unusual accomplishment is that this survey never seems hurried. Without apparent strain, details and examples of historical trends are related to grand themes and changes."—Paul Freedman, author of Out of the East: Spices and the Medieval Imagination

Chris Wickham is Chichele Professor of Medieval History, University of Oxford. He lives in Birmingham, UK.
Loading...
or
Not Currently Available for Direct Purchase