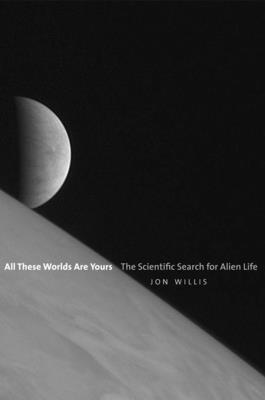 All These Worlds Are Yours

The Scientific Search for Alien Life

Where would you look for alien life? An astronomer and science popularizer explains the basics of astrobiology to outline five plausible scenarios for finding extraterrestrials

Long before space travel was possible, the idea of life beyond Earth transfixed humans. In this fascinating book, astronomer Jon Willis explores the science of astrobiology and the possibility of locating other life in our own galaxy.

Describing the most recent discoveries by space exploration missions, including the Kepler space telescope, the Mars Curiosity rover, and the New Horizons probe, Willis asks readers to imagine—and choose among—five scenarios for finding life. He encourages us to wonder whether life might exist within Mars’s subsoil ice. He reveals the vital possibilities on the water-ice moons Europa and Enceladus. He views Saturn’s moon Titan through the lens of our own planet’s ancient past. And, he even looks beyond our solar system, investigating the top candidates for a “second Earth” in a myriad of exoplanets and imagining the case of a radio signal arriving from deep space. Covering the most up-to-date research, this accessibly written book provides readers with the basic knowledge necessary to decide where they would look for alien life.

Praise For All These Worlds Are Yours: The Scientific Search for Alien Life…

"A concise overview of astrobiology and what we know—and, more importantly, what we don’t—about the search for life elsewhere in our solar system and beyond."—The Space Review


"All These Worlds Are Yours is a serious but accessible examination of the prospects for finding life elsewhere in the universe. From the solar system to planets around other stars, this is a lively guidebook for where life could be and how we can go about looking for it."—Sean Carroll, author of The Big Picture: On the Origins of Life, Meaning, and the Universe Itself

"Jon Willis has written an engaging primer on astrobiology that is both comprehensive and conversational. All These Worlds Are Yours covers everything under the sun—and far beyond—about the hunt for alien life."—Lee Billings, author of Five Billion Years of Solitude: The Search for Life Among the Stars

"A brilliantly written summary of the classical work on the chemistry of life, and the latest results in the exploration of moons and planets within, and the search for planets without, our Solar System."—Steven Benner, author of Life, the Universe, and the Scientific Method

An active researcher in the fields of cosmology and the evolution of galaxies, Jon Willis is associate professor of astronomy at the University of Victoria in British Columbia, where he teaches a popular course on astrobiology.
Loading...
or
Not Currently Available for Direct Purchase