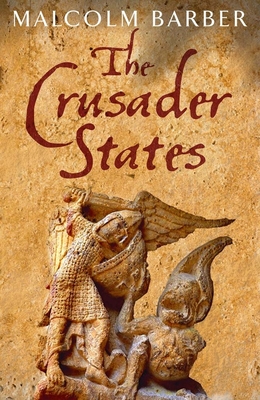 The only full account of life and culture in the twelfth-century crusader states, where religious battles raged and civilizations collided

When the armies of the First Crusade wrested Jerusalem from control of the Fatimids of Egypt in 1099, they believed their victory was an evident sign of God's favor. It was, therefore, incumbent upon them to fulfill what they understood to be God's plan: to reestablish Christian control of Syria and Palestine. This book is devoted to the resulting settlements, the crusader states, that developed around the eastern shores of the Mediterranean and survived until Richard the Lionheart's departure in 1192. Focusing on Jerusalem, Antioch, Tripoli, and Edessa, Malcolm Barber vividly reconstructs the crusaders' arduous process of establishing and protecting their settlements, and the simultaneous struggle of vanquished inhabitants to adapt to life alongside their conquerors.

Rich with colorful accounts of major military campaigns, the book goes much deeper, exploring in detail the culture of the crusader states—the complex indigenous inheritance; the architecture; the political, legal, and economic institutions; the ecclesiastical framework through which the crusaders perceived the world; the origins of the Knights Templar and the Hospitallers; and more. With the zest of a scholar pursuing a lifelong interest, Barber presents a complete narrative and cultural history of the crusader states while setting a new standard for the term "total history."


Praise For The Crusader States…

"With its highly readable prose, numerous maps, plans and illustrations of objects and places, Malcolm Barber’s study of the crusader states is an enriching account of the expansion of the political and cultural frontiers of the Latin West in the central Middle Ages. It will doubtless be of value to scholars, students and a much wider audience, intrigued by the challenges and possibilities of state building in the medieval world."—William Purkis, History Today
— William Purkis

"Barber is a highly distinguished scholar, whose touch is continually deft, and he navigates the basis of the main narrative histories with care, never prepared to take allegations and accusations at face value. The result is both genuinely illuminating and highly enjoyable… A fine book, told by a historian whose handling of the ups and downs of the Latin East is a delight to read."—Peter Frankopan, LiteraryReview
— Peter Frankopan

‘Full of insights drawn from close engagement with the primary sources, Malcolm Barber weaves together complex narrative with sharp analysis to provide a vivid and compelling account of the nature, variety, opportunities and challenges of what proved to be a doomed society. Free from the determinism of hindsight and written with customary control and clarity, this fresh account deserves a wide audience.' - Christopher Tyerman, author of God's War: A New History of the Crusades
— Christopher Tyerman

'A finely judged blend of narrative and analysis draws upon the latest scholarship to deftly guide the reader through the complexities and contradictions of the history of the crusader states. Barber provides a convincing and engaging picture of the Franks' efforts to meet the enormous challenges in trying to establish their rule over an area of extraordinary religious, cultural and economic diversity.'—Jonathan Phillips, author of Holy Warriors: A Modern History of the Crusades
— Jonathan Phillips

Malcolm Barber is emeritus professor of history, University of Reading. He lives in Reading, UK.
Loading...
or
Not Currently Available for Direct Purchase