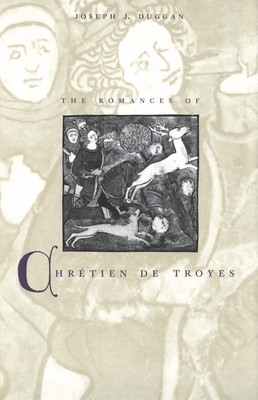 The Romances of Chrétien de Troyes

Twelfth-century French poet Chrétien de Troyes was one of the most influential figures in Western literature, for his romantic poems on the legend of King Arthur gave rise to a tradition of storytelling that continues to this day. This important and fascinating book is a study of all of Chrétien’s work.

Joseph J. Duggan begins with an introduction that sets Chrétien within the social and intellectual currents of his time. He then organizes the book in chapters that focus on major issues in Chrétien’s romances rather than on individual works, topics that range from the importance of kinship and genealogy to standards of secular moral responsibility and from Chrétien’s art of narration to his representation of knighthood. Duggan offers new perspectives on many of these themes: in a chapter on the influence of Celtic mythology, for example, he gives special attention to the ways Chrétien integrated portrayals of motivation with mythic themes and characters, and in discussing the Grail romance, he explores the parallels between Perceval’s and Gauvain’s adventures.

Joseph J. Duggan is professor of French and Bernie S. Williams Professor of Comparative Literature at the University of California, Berkeley, where he also serves as associate dean of the Graduate Division.
Loading...
or support indie stores by buying on