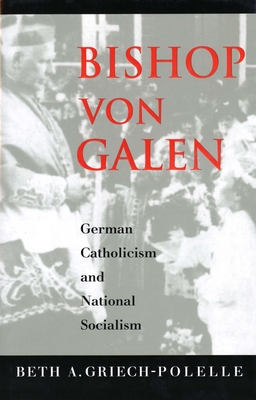 Clemens August Graf von Galen, Bishop of Münster from 1933 until his death in 1946, is renowned for his opposition to Nazism, most notably for his public preaching in 1941 against Hitler’s euthanasia project to rid the country of sick, elderly, mentally retarded, and disabled Germans. This provocative and revisionist biographical study of von Galen views him from a different perspective: as a complex figure who moved between dissent and complicity during the Nazi regime, opposing certain elements of National Socialism while choosing to remain silent on issues concerning discrimination, deportation, and the murder of Jews.

Beth Griech-Polelle places von Galen in the context of his times, describing how the Catholic Church reacted to various Nazi policies, how the anti-Catholic legislation of the Kulturkampf shaped the repertoire of resistance tactics of northwestern German Catholics, and how theological interpretations were used to justify resistance and/or collaboration. She discloses the reasons for von Galen’s public denunciation of the euthanasia project and the ramifications of his openly defiant stance. She reveals how the bishop portrayed Jews and what that depiction meant for Jews living in Nazi Germany. Finally she investigates the creation of the image of von Galen as “Grand Churchman-Resister” and discusses the implications of this for the myth of Catholic conservative “resistance” constructed in post-1945 Germany.

Beth A. Griech-Polelle is assistant professor of modern European history at Bowling Green State University.
Loading...
or support indie stores by buying on