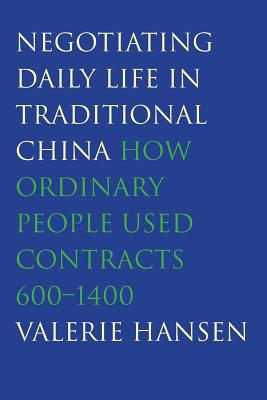 This intriguing book explores how ordinary people in traditional China used contracts to facilitate the transactions of their daily lives, as they bought, sold, rented, or borrowed land, livestock, people, or money. In the process it illuminates specific everyday concerns during China's medieval transformation.

Valerie Hansen translates and analyzes surviving contracts and also draws on tales of the supernatural, rare legal sources, plays, language texts, and other anecdotal evidence to describe how contracts were actually used. She explains that the educated wrote their own contracts, whereas the illiterate paid scribes to draft them and read them aloud. The contracts reveal much about everyday life: problems with inflation that resulted from the introduction of the first paper money in the world; the persistence of women's rights to own and sell land at a time when their lives were becoming more constricted; and the litigiousness of families, which were complicated products of remarriages, adoptions, and divorces. The Chinese even armed their dead with contracts asserting ownership of their grave plots, and Hansen provides details of an underworld court system in which the dead could sue and be sued. Illustrations and maps enrich a book that will be fascinating for anyone interested in Chinese life and society.

Valerie Hansen is associate professor of history at Yale University.
Loading...
or support indie stores by buying on