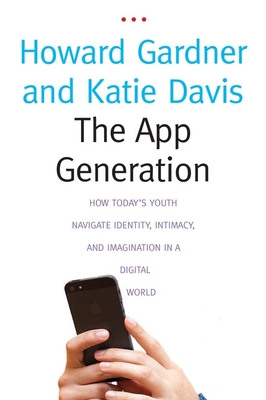 How Today's Youth Navigate Identity, Intimacy, and Imagination in a Digital World

From the famed Harvard psychologist and an expert on the impact of digital media technologies, a riveting exploration of the power of apps to shape our young people—for better or for worse

No one has failed to notice that the current generation of youth is deeply—some would say totally—involved with digital media. Professors Howard Gardner and Katie Davis name today’s young people The App Generation, and in this spellbinding book they explore what it means to be “app-dependent” versus “app-enabled” and how life for this generation differs from life before the digital era.

Gardner and Davis are concerned with three vital areas of adolescent life: identity, intimacy, and imagination. Through innovative research, including interviews of young people, focus groups of those who work with them, and a unique comparison of youthful artistic productions before and after the digital revolution, the authors uncover the drawbacks of apps: they may foreclose a sense of identity, encourage superficial relations with others, and stunt creative imagination. On the other hand, the benefits of apps are equally striking: they can promote a strong sense of identity, allow deep relationships, and stimulate creativity. The challenge is to venture beyond the ways that apps are designed to be used, Gardner and Davis conclude, and they suggest how the power of apps can be a springboard to greater creativity and higher aspirations.

Howard Gardner is Hobbs Professor of Cognition and Education at the Harvard Graduate School of Education and senior director of Harvard Project Zero, an educational research group. He lives in Cambridge, MA. Katie Davis is assistant professor, University of Washington Information School, where she studies the role of digital media technologies in adolescents’ lives. She lives in Seattle, WA.

Praise For The App Generation: How Today's Youth Navigate Identity, Intimacy, and Imagination in a Digital World…

"An ambitious and admirable project. . . . Meticulously researched and thoughtful."—New York Times Book Review
"[The App Generation] possesses an interesting insight. 'Young people growing up in our time are not only immersed in apps, . . . they’ve come to think of the world as an ensemble of apps, to see their lives as a string of ordered apps, or perhaps, in many cases, a single, extended, cradle-to-grave app.'"—Dwight Garner, New York Times

"Many of the observations . . . are illuminated with careful thought and research [and] offer a readable and intelligent summary of where we are today."—Josh Glancy, The Sunday Times

"Gardner is a renowned psychologist who has long decried box-ticking behaviourist approaches to education . . . he and Davis . . . build a strong case that a dependency on apps is having a reductive effect on young people."—Gautam Malkani, The Financial Times
"Provocative . . . Provides useful frameworks for future research."—Publishers Weekly
"Elevates the discussion beyond knee-jerk complaints about 'those #@#!! kids who are on their phones all day.'"—Mindful Magazine
"Gardner and Davis have offered a challenging and thought-provoking book: particularly rewarding for educators who are interested in thinking about how young people are changing, and how we might preserve the best practices of our profession while adapting the tools that define a generation."—Education Week's EdTech Researcher
"This compelling book explores what it's like to be 'app-dependent' and what life was like before the power of apps on our society. Howard Gardner, the renowned father of the multiple intelligence theory, along with co-writer Kate Davis, offers readers an in-depth look at the benefits and drawbacks of apps, and how the power of these apps can lead to greater creativity."—Top Books for Educators, About.com
"A thoughtful overview of how digital media and applications have contributed to a pervasive app mentality among youth. . . . The combination of conversational style and scholarly annotations makes the book rewarding for a broad audience, including parents and educators. . . . Highly recommended. All Readers."—Choice
"Here we have a serious consideration that a generation has grown up with an emotional aesthetic as instrumental as their technology. That is, this generation approaches intimacy, identity, and imagination through the prism of the apps that have surrounded them. Gardner and Davis further consider the proposition that 'What can’t be an app doesn’t matter.' But the authors do more than this. They approach their subject in a constructive spirit, providing analytical tools to distinguish among apps, the ones that will stifle and the ones that will nurture. In the end, they see a way forward: We are responsible, individually and in our communities and families to use technology in ways that open up the world rather that close it down. The App Generation is not anti-technology; it simply puts technology in its place."—Sherry Turkle, author of Alone Together: Why We Expect More from Technology and Less from Each Other
"The App Generation deals with a crucial issue for our future, and it is a pioneering and prophetic work in its genre."—Mihaly Csikszentmihalyi, author of Flow: The Psychology of Optimal Experience
"This book is must reading for parents, teachers and policy makers. It presents a portrait of today’s young people, not in terms of the traditional historical events of their lives, but instead the digital technology that shaped this generation. It compellingly and powerfully examines the impact, consequences, and implications for their and society’s future."—Arthur Levine, President of the Woodrow Wilson Foundation & former President of Teachers College, Columbia University
"Most discussions about youth and technology tilt toward one extreme (digital wonder-kids!) or the other (perpetual distractions!). In The App Generation, Howard Gardner and Katie Davis combine academic research with personal reflections to provide a more nuanced perspective on both the challenges and opportunities for young people as they navigate the dynamic digital currents in today’s society."—Mitchel Resnick, LEGO Papert Professor of Learning Research and head of the Lifelong Kindergarten group at the MIT Media Lab
"Howard Gardner is one of America’s most celebrated developmental psychologists and public intellectuals. His latest work is always worth reading."—Robert Putnam, John F. Kennedy School of Government, Harvard University