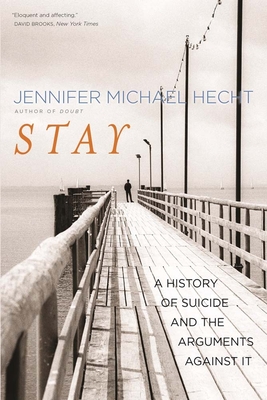 A History of Suicide and the Arguments Against It

Worldwide, more people die by suicide than by murder, and many more are left behind to grieve. Despite distressing statistics that show suicide rates rising, the subject, long a taboo, is infrequently talked about. In this sweeping intellectual and cultural history, poet and historian Jennifer Michael Hecht channels her grief for two friends lost to suicide into a search for history’s most persuasive arguments against the irretrievable act, arguments she hopes to bring back into public consciousness. From the Stoics and the Bible to Dante, Shakespeare, Wittgenstein, and such twentieth-century writers as John Berryman, Hecht recasts the narrative of our “secular age” in new terms. She shows how religious prohibitions against self-killing were replaced by the Enlightenment’s insistence on the rights of the individual, even when those rights had troubling applications. This transition, she movingly argues, resulted in a profound cultural and moral loss: the loss of shared, secular, logical arguments against suicide. By examining how people in other times have found powerful reasons to stay alive when suicide seems a tempting choice, she makes a persuasive intellectual and moral case against suicide.


Praise For Stay: A History of Suicide and the Arguments Against It…

"Hecht is an intellectual historian and a poet, and her writing reflects both disciplines: The book is rigorous and deeply rewarding, both accessible and challenging. . . . She finds common threads: sympathy for life’s difficulty, yet a plea to stay, for the sake of one’s community and even for one’s future self."—Kate Tuttle, Boston Globe


"A history not only of suicide, but how we think about suicide. . . . Hecht proposes her own argument against suicide in the secular, modern world, presenting a humanist call for life. . . . Her final plea to the suicidal gives the book its title: she urges them to simply 'stay.'"—Thomas Flynn, The Daily Beast

"The author of the best-selling Doubt offers a history of suicide and of arguments against it. . . . Even Camus, who found the search for meaning as absurd as pushing the same boulder up a cliff every day, urged his readers to ‘imagine Sisyphus happy,’ and to live."—New Yorker

"Hecht’s intentions are patently generous and benign. She wants to save young lives that seem needlessly lost . . . On these counts her book merits praise."—John Carey, The Sunday Times

"While not insensitive to people who use suicide as a way to end the suffering of terminal illness, Hecht brands suicide an immoral act that robs society — and the self-killer — of a life that is certainly more valuable than what it may seem in that dark moment. It solves nothing, complicates everything. . . . Her argument is that it — whatever dark truth that pronoun signifies — almost always gets better."—Newsweek


"Suicide as a concept has been praised, defended, and vilified in various contexts throughout history as poet and scholar Hecht (Doubt: A History) painstakingly illustrates in this nuanced and unsettling work, whose title acts as a rallying refrain throughout. . . . The book’s conclusions are hopeful. Gratitude is owed to those who reject suicide, according to Hecht, not only by the community but also by one's 'future self' who may be days, months, or years away. Like death, life can inspire, because one's 'ideas matter.'"—Publishers Weekly

"Stay is more than a must-read — it’s a cultural necessity."—Maria Popova, Brain Pickings

"This defiantly positive note — this striving for hope — is the most uplifting part of Stay. . . . Current statistics clearly show that few of Hecht's potential readers will have lives completely untouched by suicide; all of those potential readers will find a great deal to interest them in these pages."—Steve Donoghue, Open Letters Monthly

"In her impassioned, compelling book Stay: A History of Suicide and the Philosophies Against It, Jennifer Michael Hecht makes the sustained argument she wishes she could have made to two friends who committed suicide. . . . While Hecht's position is secular, religious people have nothing to fear from her, and would likely make common cause with her on many points. Her heartfelt book is the scholarly and literary equivalent of Kate Bush's vocals in a familiar Peter Gabriel song, singing to her despairing partner, 'Don't give up.'"—Jim Higgins, Milwaukee Journal Sentinel

"[Hecht] is a first-rate historian of ideas. . . . This gift of a book is as much about the issue of pain in life as it is about not ending your life because of the pain. Following in both a religious and a secular tradition, Hecht submits that suffering is soul-making. . . . This tender and well-reasoned book is sure to save lives."—Gordon Marino, The Christian Century

"If we are serious about helping people overcome the dark nights of their souls, we must insist with Chesterton that suicide is a moral, not just a clinical, problem. An important new book does just that. Stay: A History of Suicide and the Philosophies Against It by the poet and philosopher Jennifer Michael Hecht challenges our culture's acceptance of suicides and reinvigorates the moral arguments against it. At a time when few philosophers or intellectuals are offering strong, compelling, secular arguments against suicide, Hecht's book steps in as a reminder that our liberal stance toward suicide is relatively new, in fact quite radical, and should be unequivocally challenged. . . . The book fills a hole in the cultural conversation. . . . Hecht writes, 'The arguments against suicide that I intend to revivify in public consciousness assert that suicide is wrong, that it harms the community, that it damages humanity, that it unfairly preempts your future self.'"—Emily Esfahani Smith, New Criterion

"A humanist case for embracing life, as armor against cynicism. . . . Stay is compassionate, clear, rich, and even funny."—Temma Ehrenfeld, The Humanist Magazine

"This book is extremely important. Hecht’s argument—that simply staying alive is incredibly helpful to those you love and those you don’t even know—is tremendously persuasive. Everybody should read this. . . . Stay is a convincing and powerful enough book to help people when they need it the most."—Audrey Curtis, San Francisco Book Review

"Dr. Hecht . . . takes the reader through an extensive examination of the beliefs and attitudes surrounding suicide . . . with a conversational tone that allows her to weave her findings into a comprehensive text."—B. Kay Campbell, Michigan Psychological Association

"The title of this book is an imperative against the departure that is suicide, and its contents provide a learned, illuminating look at the history of what is perhaps the darkest secret in all of human behavior."—Billy Collins

"Jennifer Michael Hecht addresses the problem of suicidal nihilism with intellectual sophistication and poetic subtlety. An impassioned defense of life and rejection of self-slaughter (as Hamlet termed it), Stay is an important book."—David Lehman, Editor, The Oxford Book of American Poetry

"The perfect vehicle for an informed conversation about the virtues and vices of suicide, this book will literally save lives."—Stephen Prothero, author of The American Bible: How Our Words Unite, Divide, and Define a Nation

"In this moving and meaningful book, mythology, poetry, history, and personal reflection all combine to persuade us to stay right here, among the living."—Alan Wolfe, author of Political Evil

Jennifer Michael Hecht is a historian of science and culture and a poet. She has written seven books, including the best-selling Doubt: A History, the story of unbelief across the world. Hecht teaches at The New School and lives in Brooklyn.
Loading...
or support indie stores by buying on